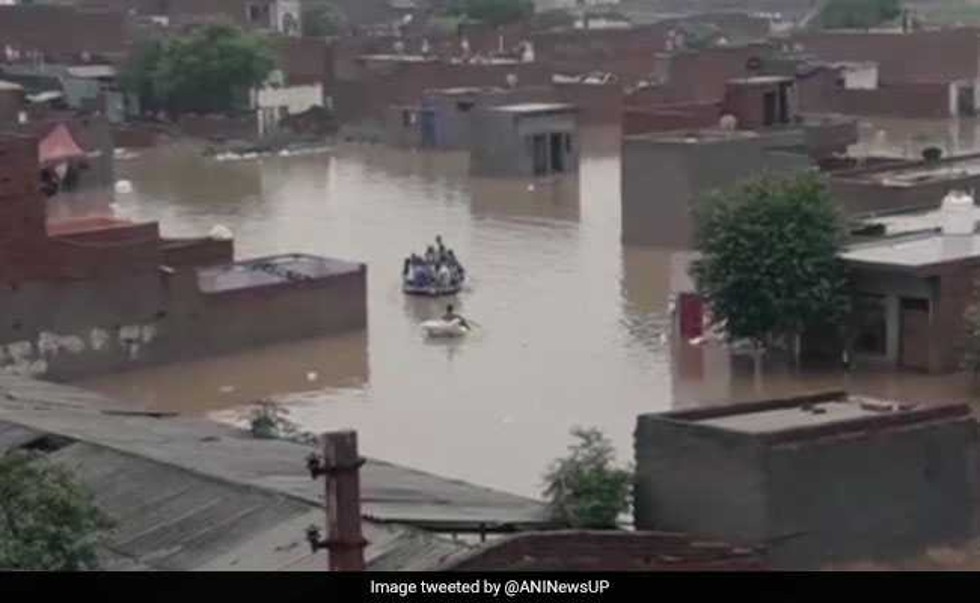 Lucknow: At least 10 people were killed, seven of them in Etawah, and 11 injured in incidents of lightning, and wall and house collapses as heavy rains in parts of Uttar Pradesh affected normal life in Firozabad and forced the closure of schools in Aligarh.
Apart from Etawah — where the seven dead included four children of a family — deaths have also been reported from Firozabad (2) and Balrampur (1) districts since Wednesday, officials said.

According to the India Meteorological Department, rainfall or thundershowers have been observed at most places over West Uttar Pradesh since Wednesday morning. It said Etawah observatory recorded 140 mm rainfall in 24 hours till 8.30 am Thursday. Rainfall was reported from Agra also.

Their sibling (5) and grandmother, Chandni Debi (70), were injured in the incident. Etawah Superintendent of Police (City) Kapil Dev Singh said an elderly couple — Ram Sanehi (65) and Reshma Debi (62) — died when a boundary wall of a petrol pump collapsed onto their hut in Kripalpur village under Ekdil police station.

In yet another incident in the district, Jabar Singh (35) was buried alive after his house in Andava ke Banglan village under Chakarnagar police station collapsed following heavy rains, SHO Deepak Kumar said.

The injured have been admitted to the district hospital.

In another incident in the district, Isaac Ali, 57, died under the rubble of a collapsed wall in Nagla Gawe of Eka police station area.

Officials said normal life has been adversely hit due to the incessant rains in Firozabad over the past two days, affecting people’s movement due to waterlogging in urban and rural areas.

In Balrampur district, Ashraf (13) died and his 12-year-old cousin suffered burns due to lightning at Bargadwa Saif village of Pachpedwa police station on Thursday, a senior official said.

The injured has been admitted to a hospital.

In Aligarh, heavy rains over the past three days caused waterlogging in several low lying areas of the city and rural belts, affecting normal life in the district.

District magistrate Inder Veer Singh issued an order asking all government and private schools to remain shut till Saturday, according to an official release.