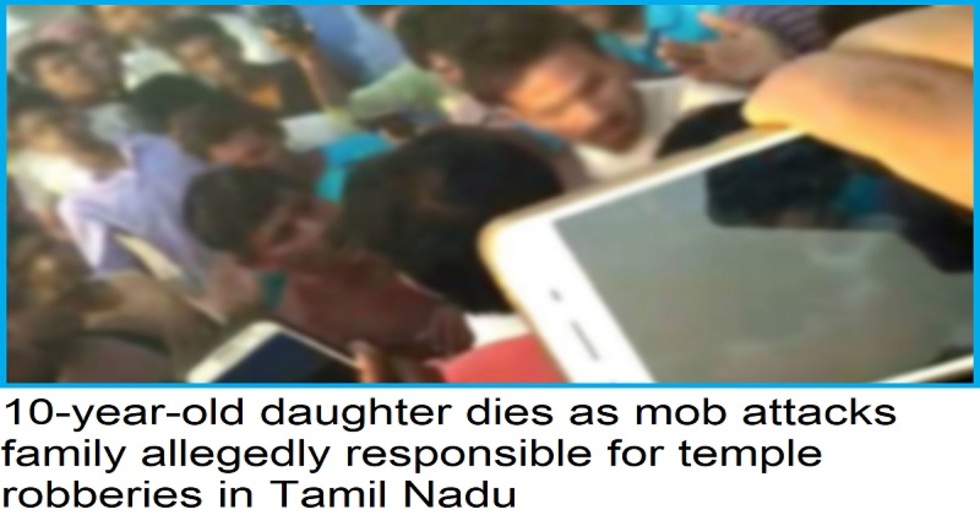 A family of six were chased and attacked by a mob of villagers from Tamil Nadu’s Pudukottai who claimed that they had stolen from a temple. A 10-year-old girl from the family also died due to the assault by the mob. A video of the mob assaulting the family has gone viral on social media.

On November 14, messages went viral on WhatsApp stating that a group was found robbing roadside temples near Killanur village in TN’s Pudukottai district. Upon spotting a group of six outsiders travelling in an autorickshaw, a gang of villagers started chasing the vehicle, claiming that they were the robbers.
The gang surrounded the autorickshaw and stopped it near the Machuvadi area and began to brutally assault the family members. Police officials reached the spot and rescued the family, who hailed from Cuddalore.

A video of them being attacked by the mob, as the deceased Karpagambika stood by helplessly has also gone viral. The family was admitted to the Pudukottai government hospital, where the child who was severely injured died on Wednesday evening, November 16.

The child’s mother, Lilly Pushpa, has now filed a complaint with the Ganesh Nagar police stating that she, along with her family, had left Cuddalore two months ago in an autorickshaw to visit a series of temples.

On November 14, three men had quarrelled with her near Killanur. When her husband, Sathyanarayanasamy, intervened, they began to attack her. She also stated that the group began to chase them. Meanwhile, another video of the items allegedly stolen by the family, which was shot by villagers, has also gone viral.

Aaftab’s family did not allow us to meet them, says Shraddha’s father
Wrong National Anthem? ‘What is this, Rahul Gandhi?’ BJP leaders slam. Watch