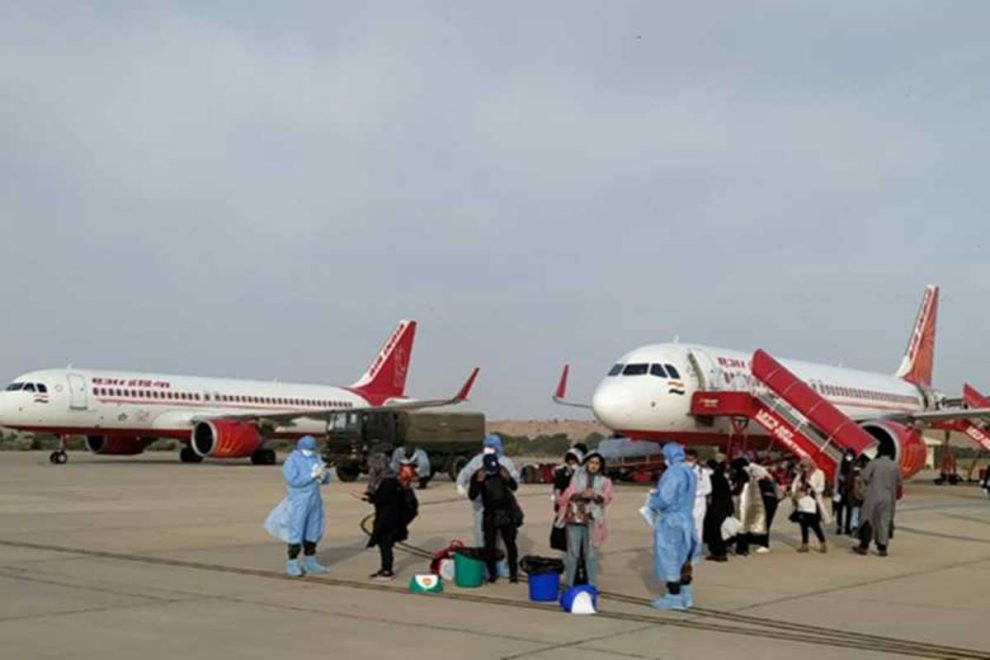 NEW DELHI: India has embarked on a massive operation involving naval ships and aircraft in a phased manner to bring back some of the hundreds of thousands of nationals stuck abroad due to coronavirus restrictions, the government said.
India banned all incoming international flights in late March as it imposed one of the world’s strictest virus lockdowns, leaving vast numbers of workers and students stranded.
Here is how India plans to bring back its stranded citizens across the world:
* The ministry of external affairs has prepared a chart for the evacuation of over 14,000 Indian nationals stranded in 13 foreign countries by 64 flights in week 1 of the operation.
* According to the MEA plan that is set to begin from May 7, an approximate 14,800 passengers will be evacuated from 13 different countries. Flights from India will fly to the Philippines, Singapore, Bangladesh, UAE, UK, Saudi Arabia, Qatar, Singapore, Phillippines, USA, Oman, Bahrain and Kuwait.
* The Indian embassy and its consulates in other countries, like the UAE and US had started preparing a list of Indians planning to travel back home. The list is being prepared through an online registration form.
* Three Navy warships have also sailed out to bring back stranded Indian citizens from the Maldives and United Arab Emirates. A total of 14 warships have been readied for evacuating Indian citizens from the Gulf and other countries.
* Indians being brought back to India will need to pay the airfares and bear cost of quarantine at designated places for 14 days on return.
* Priority is being given to the most vulnerable categories such as pregnant women and very elderly people, people facing medical emergencies, people who have bereavements or terminally/seriously illnesses in their most immediate families in India, stranded tourists etc.
* The first day of evacuation will see 10 flights repatriate 2300 Indians.
* On Day 2, around 2050 Indian nationals will arrive in Chennai, Kochi, Mumbai, Ahmedabad, Bengaluru and Delhi from nine different countries, according to the plan.
* On Day 3, some 2050 stranded nationals are expected to arrive in Mumbai, Kochi, Lucknow and Delhi from 13 countries spread across the Middle East, Europe, South East Asia and USA.
* On Day 4 of the plan, the aviation ministry in collaboration with the MEA will evacuate 1850 stranded nationals from eight different countries, including the USA, UK and the UAE.
* Prior to boarding the evacuation flights, all persons coming to India are required to fill-up a form and submit a copy each to the health and immigration counter at arrival. The passengers are required to state whether they are suffering from fever, cough, diabetes or any respiratory disease. This form is similar to the one filled by passengers arriving back into the country during the early days of the Covid-19 outbreak.
* The government’s official guidelines say all passengers will be screened before they are allowed to board flights for their return, and only asymptomatic passengers would be allowed to travel.
* During the journey, they will have to follow the protocols such as those issued by the health ministry and the civil aviation ministry.
* Upon their arrival in India, everyone would be medically screened. After scrutiny, they would be quarantined for 14 days, either in a hospital or in an institutional quarantine on payment-basis, by the concerned state governments.
* On reaching India, all the passengers would have to register on the Aarogya Setu app.
* This airlift by the MEA would be the largest since the Persian Gulf War evacuation of over 170,000 people from Kuwait in 1990. Similar evacuations were also seen in April 2015, when Operation Raahat was launched to evacuate Indians from war-torn Yemen.
(With agency inputs)

Give money directly to people to revive economy: Abhijeet Banerjee to Rahul
Indian citizens stranded abroad to be brought back from May 7: Centre to SC