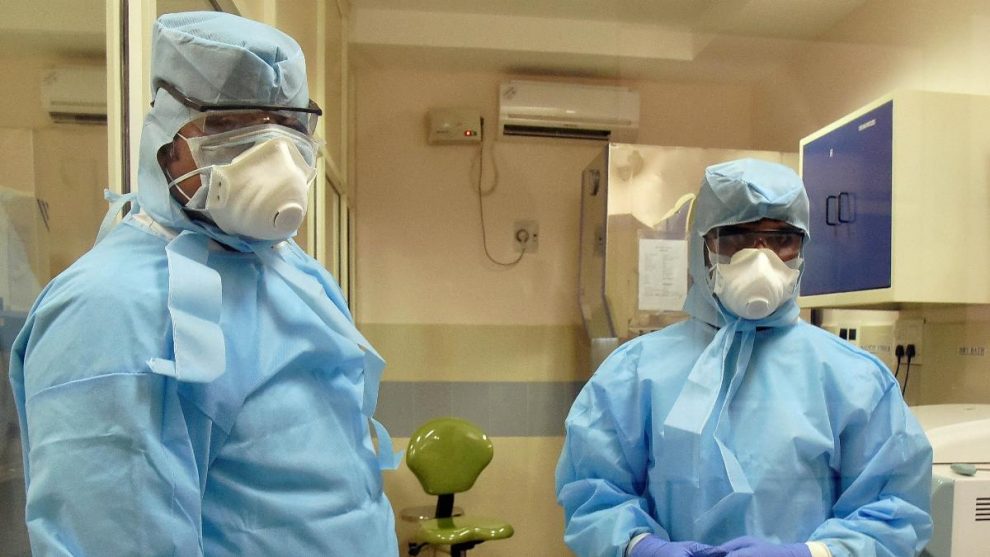 NEW DELHI: For the fourth day running, the number of new Covid-19 cases in India hit a new high, with 2,900 being added on Monday as the country’s total coronavirus count crossed 45,000. In a huge spike in infections, Tamil Nadu became the second state after Maharashtra to report more than 500 cases in a day.
There were 99 corona-related deaths across the country, the joint-highest for a single day along with Saturday’s toll.
Tamil Nadu’s recorded as many as 527 new cases while Maharashtra continued to register the country’s highest Covid count, 771 on Monday. Delhi’s count, at 349, dipped marginally from Sunday’s peak.
Along with Tamil Nadu, the states that reported their highest single-day rise in cases on Monday were Gujarat (376), Rajasthan (175) Haryana (75) and West Bengal (61).
Maharashtra reported as many as 35 deaths on Monday, the second-highest for a single-day in the state, 18 of which were in Mumbai. The city also reported 510 new cases, taking its total count past 9,000. Deaths in Gujarat touched a new high of 29, with Ahmedabad accounting for as many as 26.
Following the highest single-day death toll in Ahmedabad, the state has decided to involve intensivists and critical-care specialists from private sector to work in government hospitals on honorary and consulting basis to contain the crisis.
“We are also going to carry out autopsy of the Covid-19 patients after clearance from B J Medical College’s ethics committee. As in countries like Italy, this is to find out the cause of disseminated intravascular coagulation, also identified as thrombosis, in Covid-19 patients,” state authorities said.
While there was a slight drop in the number of cases in Delhi from the previous day, the capital has now reported more than 300 daily cases for three consecutive days, indicating a distinct spike in the infections. The city’s total corona count is just short of 5,000 at 4.898.
With a rash of cases on Monday taking Tamil Nadu’s total Covid-19 tally to 3,550, many of the state’s districts that were declared orange zones have been re-classified as red again.
Another state where Covid-19 seems to be on the rise is Punjab. Last one week has been rough for the state as it has been hit by a barrage of pilgrims who recently returned from Nanded testing positive.
On Monday, 132 more cases, including 124 pilgrims, were added to Punjab overall tally which increased to 1,232. The Nanded returnees (774 cases) constitute 63% of the overall tally. Its adjoining state, Haryana, has also witnessed around 195% increase in active cases of Covid-19 over the past week. The state’s Covid-19 count has now reached 517.
In Tripura, a day after 12 BSF jawans of the 138th battalion tested positive, 11 jawans of the same battalion and two of their children were found infected by Covid-19 on Monday. State CM Biplab Kumar Deb tweeted, “More 13 persons including two kids of 138th-Bn #BSF Ambassa found #COVID19 positive. Total #COVID19 positive cases in #Tripura stands at 29 (2 already discharged, so active cases : 27). Don’t panic, follow the Govt guidelines and Stay at Home.”
Telangana, where new cases have dipped significantly, has said the ongoing lockdown has helped in reducing new cases.
Andhra Pradesh has stepped up screening for coronavirus with more than 10,000 people tested in 24 hours as the state recorded 67 more positive cases, raising the tally to 1,650. The state has so far carried out about 1.25 lakh tests, standing in the first place among all the states in terms of conducting the highest number of tests per every million population.
In Bihar and Jharkhand, Covid-19 cases have reduced. Eleven new Covid-19 positive cases were reported in Bihar on Monday, taking the total number to 528 in the state. This is the lowest one-day count recorded in two weeks. Jharkhand did not report a single new Covid-19 case for the second consecutive day on Monday, but sources said this could be deceptive as the number of tests being conducted fell significantly once the microbiology department at Rajendra Institute of Medical Sciences was shut down for four days on May 1 after a lab technician tested positive for the coronavirus.