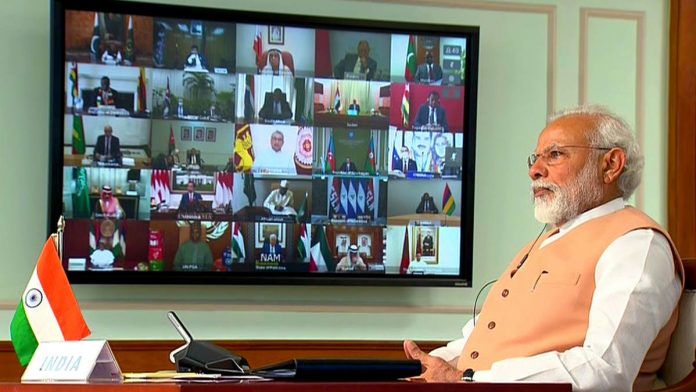 NEW DELHI: Calling for an inclusive and cooperative global response against Covid-19 at a virtual NAM summit, PM Narendra Modi said Monday that India, as a developing country and free society, had shown during the crisis how democracy, discipline and decisiveness can together create a genuine people’s movement.
In his intervention, Modi said that despite India’s own needs, it had ensured medical supplies to over 123 partner countries, 59 of them NAM member states. While he said he wanted to focus only on the positives, he touched upon the issue of terrorism, calling it another deadly virus which “some people’’ were trying to spread. He also spoke about fake news and doctored videos being used to divide communities and countries, in an allusion to recent developments in the Gulf.
This was Modi’s first appearance in a NAM meeting at the summit level. In what has been seen as a decisive foreign policy shift, he had skipped the regular NAM summits in 2016 and 2019.
“India’s civilisation sees the whole world as one family. As we care for our own citizens, we are also extending help to other countries. To counter COVID-19, we have promoted coordination in our immediate neighbourhood. And, we are organising online training to share India’s medical expertise with many others. India is regarded as a pharmacy of the world, especially for affordable medicines,’’ said Modi.
Modi said Covid-19 had exposed the limitations of the existing international system. “In the post-COVID world, we need a new template of globalisation, based on fairness, equality, and humanity,’’ he said. The government said in a statement that Modi’s participation underlined India’s longstanding commitment to the principles and values of NAM as one of its leading founding-members. The leaders at the meeting also announced the creation of a task force to identify needs and requirements of member states through the establishment of a common database reflecting their basic medical, social and humanitarian needs in the fight against the virus.
The PM also urged NAM to call upon the international community and the WHO to focus on building health-capacity in developing countries. “We should ensure equitable , affordable and timely access to health products and technologies for all,’’ he said.
Modi said India was actively participating in global efforts to develop remedies and vaccines. “India has the world’s oldest plant-based traditional medicine system. We have freely shared simple Ayurvedic home-remedies, to help people boost their natural immunity,’’ he said.
Modi was joined by over 30 other Heads of State and Government and other leaders, including from member states in Asia, Africa, Latin America and the Caribbean, and Europe at the meeting.
According to the Indian statement, NAM Leaders assessed the impact of Covid-19, identified needs and requirements for possible remedies and urged action-oriented follow-up measures. Following the summit, leaders adopted a declaration underlining the importance of international solidarity in the fight against Covid-19.