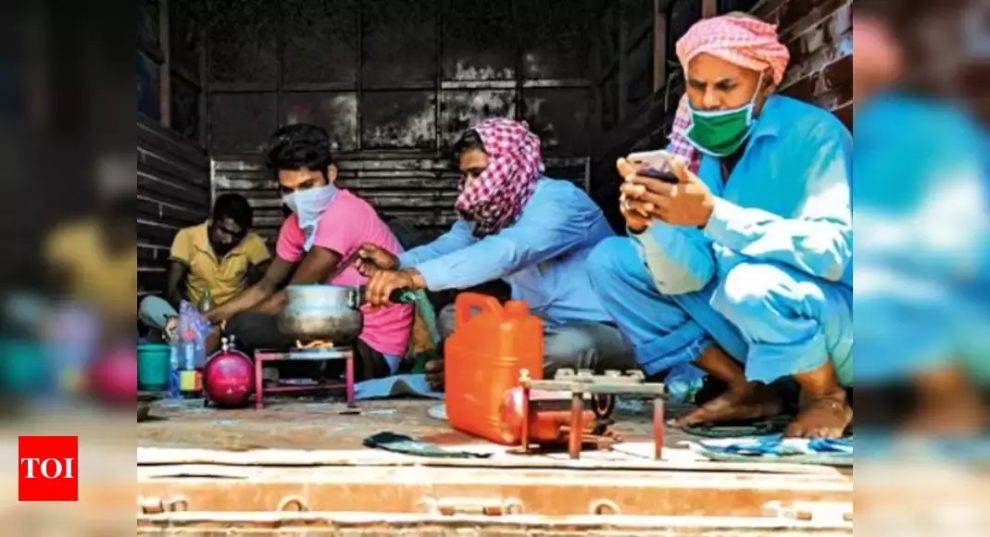 NEW DELHI: In India, with a share of almost 90% of people working in the informal economy, about 400 million workers in the informal economy are at risk of falling deeper into poverty during the crisis and it is expected to wipe out 6.7% of working hours globally in the second quarter of 2020 – equivalent to 195 million full-time jobs, a report by the International Labour Organisation said on Wednesday.
“In India, Nigeria and Brazil, the number of workers in the informal economy affected by the lockdown and other containment measures is substantial. Current lockdown measures in India, which are at the high end of the University of Oxford’s COVID-19 Government Response Stringency Index, have impacted these workers significantly, forcing many of them to return to rural areas,” the report said.
Several sectors of the economy such as tourism, hospitality, airlines, hotels and restaurants, manufacturing, media and entertainment have been hammered by the impact of the Covid-19.
The ILO report said that large reductions are foreseen in the Arab States (8.1% equivalent to 5 million full-time workers), Europe (7.8%, or 12 million full-time workers) and Asia and the Pacific (7.2%, 125 million full-time workers).
Huge losses are expected across different income groups but especially in upper-middle income countries (7.0%, 100 million full-time workers). This far exceeds the effects of the 2008-09 financial crisis, the report said.
The sectors most at risk include accommodation and food services, manufacturing, retail, and business and administrative activities.
The eventual increase in global unemployment during 2020 will depend substantially on future developments and policy measures. There is a high risk that the end-of-year figure will be significantly higher than the initial ILO projection, of 25 million, the report cautioned.
The report, which described the impact of Covid-19 as the worst global crisis since World War 2, said that more than four out of five people (81%) in the global workforce of 3.3 billion are currently affected by full or partial workplace closures.
“Workers and businesses are facing catastrophe, in both developed and developing economies,” said ILO director-general Guy Ryder. “We have to move fast, decisively, and together. The right, urgent, measures, could make the difference between survival and collapse.”
According to the new study, 1.25 billion workers are employed in the sectors identified as being at high risk of “drastic and devastating” increases in layoffs and reductions in wages and working hours. Many are in low-paid, low-skilled jobs, where a sudden loss of income is devastating.
Regionally, the proportion of workers in these “at risk” sectors varies from 43% in the Americas to 26% in Africa. Some regions, particularly Africa, have higher levels of informality, which combined with a lack of social protection, high population density and weak capacity, pose severe health and economic challenges for governments, the report cautions.
Worldwide, two billion people work in the informal sector (mostly in emerging and developing economies) and are particularly at risk.
Large-scale, integrated, policy measures are needed, focusing on four pillars: supporting enterprises, employment and incomes; stimulating the economy and jobs; protecting workers in the workplace; and, using social dialogue between government, workers and employers to find solutions, the study said.
“This is the greatest test for international cooperation in more than 75 years,” said Ryder. “If one country fails, then we all fail. We must find solutions that help all segments of our global society, particularly those that are most vulnerable or least able to help themselves.”
“The choices we make today will directly affect the way this crisis unfolds and so the lives of billions of people,” he added. “With the right measures we can limit its impact and the scars it leaves. We must aim to build back better so that our new systems are safer, fairer and more sustainable than those that allowed this crisis to happen,” said Ryder.