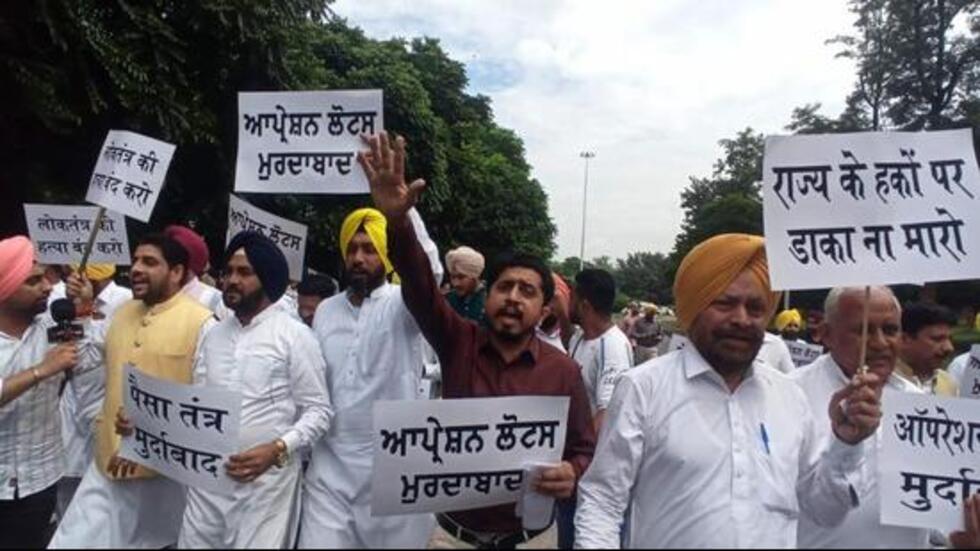 Chandigarh: Ruling Aam Aadmi Party (AAP) and Opposition BJP took out separate protest marches in Chandigarh today over the prevailing political situation in Punjab. While AAP legislators were protesting the cancellation of the special session of the Punjab assembly for a confidence vote, BJP party workers and leaders were protesting what they claimed to be false allegations of poaching against the party by the AAP leadership and the Punjab government’s attempt to summon what they termed as a needless special session of the assembly.

Yesterday, the Punjab Governor had turned down the AAP government’s demand for a special session of the assembly to introduce a confidence motion. The Governor withdrew the order to summon a special session of the Punjab assembly on September 22. His decision triggered a massive point-counterpoint between all the major political parties in the state.

AAP legislators passed a fresh resolution today to hold a special session of the assembly on September 29 for a confidence vote.

Meanwhile, BJP leaders and party workers tried to march to Chief Minister Bhagwant Mann’s residence, but they too were stopped by the police and water cannons were used on the protesters.

Carrying placards with messages of “Stop murder of democracy” and “Operation Lotus murdabad”, AAP MLAs slammed the Congress and BJP for allegedly being hand-in-glove and working against holding the special session of the assembly.