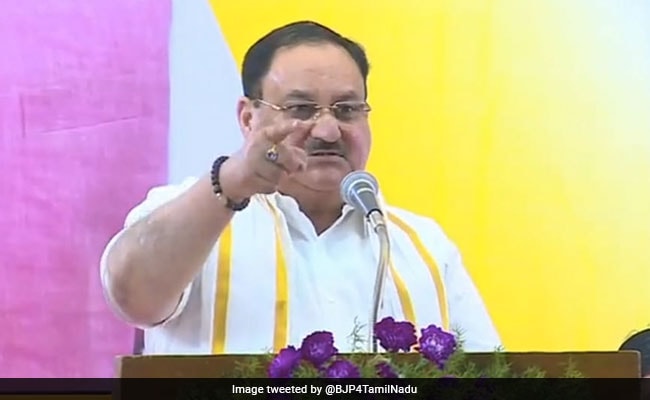 Chennai: BJP chief JP Nadda made a scathing attack on the ruling DMK in Tamil Nadu, calling it a “Dynastic Money Swindling Katta Panchayat” as he made his first move to expand the BJP’s footprint in the elusive southern state.

Tacitly aiming at Chief Minister MK Stalin for the state’s opposition to the New Education Policy and NEET, Mr Nadda said, “This is what happens when the uneducated are at the helm of affairs.”

The ruling DMK shot back, saying it wouldn’t stoop to the level of asking the educational qualifications of those in power at the centre. It, however, took a swipe at the centre on the issue of dynastic politics.

“Who’s Jay Shah and how many centuries has he hit?” DMK Spokesperson A Saravan said. Jay Shah is BJP leader and Home Minister Amit Shah’s son and an Honorary Secretary of the Board of Control for Cricket in India, or BCCI, India’s richest sporting body.

Listing the funds allocated by the centre for highways and the yet to take off AIIMS in Madurai, Mr Nadda criticised rival parties from Jammu and Kashmir to Tamil Nadu for what he called “dynastic politics”, including Mamata Banerjee’s Trinamool Congress, K Chandrashekar Rao’s TRS and Jagan Mohan Reddy’s YSR Congress.

Calling the DMK a party that spreads “hatred and division”, Mr Nadda said, “We are fighting against regional parties reduced to family dynastic parties from Kashmir to Tamil Nadu. BJP is the only ideology based national party. BJP takes care of regional aspirations.”

The DMK spokesperson countered, “BJP is the master of hatred and division. This is its real face. It has failed to give jobs to young people. The people of Tamil Nadu are wise. They will reject them in 2024.”

Mr Nadda gave the speech at Karaikudi, the home turf of Congress leader P Chidambaram, as part of the BJP’s bid to expand its footprint in the elusive southern state.

The BJP has negligible presence in Tamil Nadu, which is dominated by the two parties – DMK and AIADMK. The BJP has no elected MPs from the state. It suffered a rout in 2019, though it was in alliance with the AIADMK.

Last year it won just four seats in state elections to the 234 member house as the DMK swept to power.

With the BJP’s ally AIADMK divided due to a tussle between O Panneerselvam and E Palaniswami, the BJP is hopeful of using this to strengthen its position in the state.

India vs Australia Second T20: Where, When, and How to Watch
https://govt.in/keam-2022-first-final-allotment-list-released-at-cee-kerala-gov-in-details-here/