After Punjab governor calls off session, AAP to march to Raj Bhawan in Chandigarh - Govt.in - Telling the truth- always! 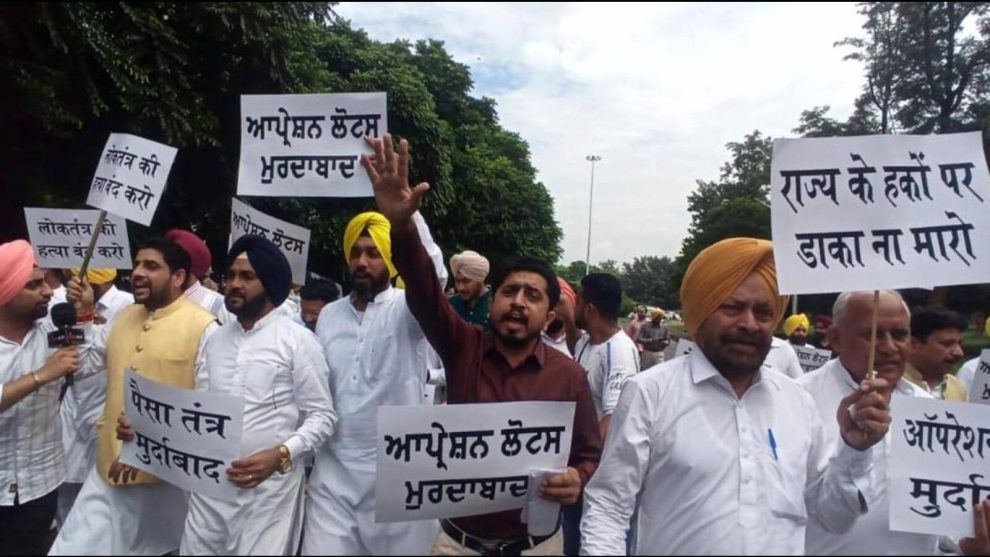 A day after governor Banwarilal Purohit withdrew his order summoning a one-day special session of the Punjab assembly, the ruling Aam Aadmi Party (AAP) and the opposition BJP are in or a face-off against each other as they plan protests in Chandigarh on Thursday.

Chief minister Bhagwant Mann, who began his day by holding a meeting with Aam Aadmi Party (AAP) MLAs, will hold a march from the state assembly to Punjab Raj Bhawan.

The meeting of the state cabinet is being held to devise the government’s strategy on the issue. There are reports that the AAP may pass a resolution condemning the governor’s action.

Cabinet minister Kuldeep Singh Dhaliwal said the government would consider calling the special session again with a revised list of business. “The matter will be discussed in the state cabinet meeting. We are an elected government, not selected by someone,” he said after the meeting of the AAP MLAs.

The tentative date being discussed is September 27.

The cabinet, according to legal experts, can call the special session with a list of business.

Former deputy speaker Bir Devinder Singh said that as per Rule 58(1) of the Rules of Procedures and Conduct of Business of the Punjab Vidhan Sabha, only a no-confidence motion can be brought against the council of ministers. “A session could not be summoned just for a confidence motion. If there is any other item such as legislative business, then the governor can permit the special session,” he said.

The BJP has also announced a gherao of the chief minister’s official residence on Thursday to expose the failures of the AAP government to fulfil its promises and to demand proof of the AAP’s allegations that it was poaching AAP MLAs.

The governor cancelled the one-day session by withdrawing his Tuesday order regarding summoning of the 16thVidhan Sabha for its third (special) session on Thursday. In his brief order, Purohit said that in the absence of the specific rules regarding summoning of the assembly for considering the “confidence motion” only called by the Punjab government, the September 20 order is withdrawn.

The special session was called by the Bhagwant Mann government on September 22 after it accused the BJP of offering money to its legislators under ‘Operation Lotus’ to topple his government in the state.

The AAP had last week accused the BJP of offering ₹25 crore each to 10 party MLAs to topple the government.

On September 14, a first information report (FIR) was registered by Punjab Police on the basis of a complaint submitted by nine AAP MLAs against the BJP and then transferred to the Vigilance Bureau.

Punjab Congress Amarinder Singh Raja Warring questioned the ruling AAP’s march to Raj Bhawan, accusing it of theatrics. “The AAP is doing politics on ‘Operation Lotus’ when they should be governing the state. They are also trying to divert attention from rumblings within the AAP,” he said, backing the governor’s decision to cancel the special session.

Abohar MLA Sandeep Jakhar also questioned the need for holding the special session to table a confidence motion. “Who has expressed doubt that they (AAP) do not have confidence of the House? The opposition hasn’t,” he said.

The Congress is also holding a meeting of its legislature party.

Part Of Hill Crashes In Massive Landslide In Uttarakhand
This Maruti Suzuki SUV sold 0 cars in July and August this year: Report