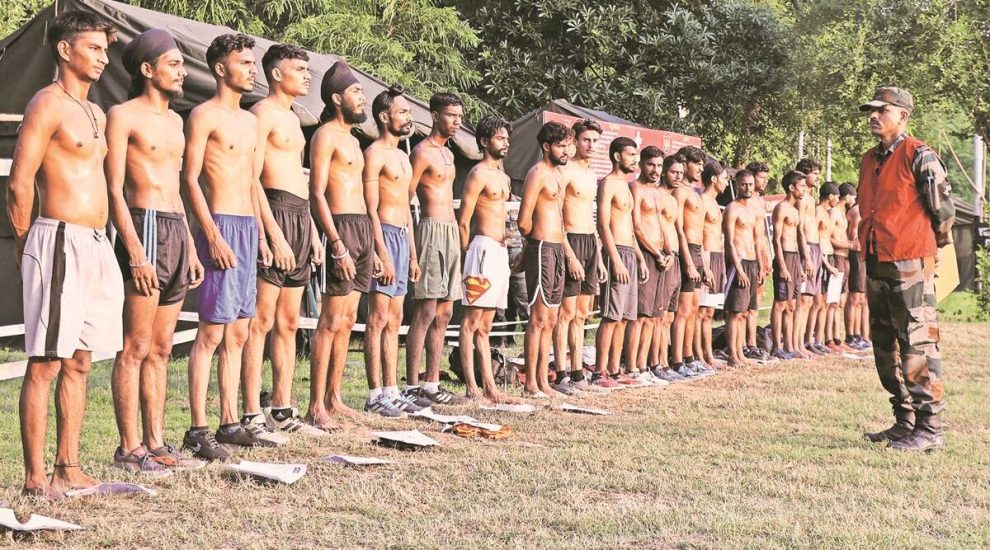 “IT IS my dream to join the Indian Army, it doesn’t matter if it is just for four years. I just want to experience the feeling of wearing the uniform, to serve our country,” said 22-year old Lovepreet Singh, a graduate, who cleared the physical test at the ongoing recruitment rally in Ludhiana under the newly launched Agnipath  scheme for the country’s armed forces. He said he has been preparing to join the Army for the last three years.

Two months after Punjab was among the many states which saw violent protests against the short-term recruitment scheme, with the State Assembly even passing a resolution against it, over 15,000 aspirants from four districts — Ludhiana, Roopnagar, Mohali and Moga — registered at the Army Recruitment Office (ARO) here for the 10-day recruitment rally which began on August 10.

“We have received a total of 15,930 applications from the four districts which are covered under Ludhiana ARO. This is more than the 14,633 applications in 2020, when the last recruitment rally was held at Khanna for these districts. However, at the Khanna rally, while the physical test was completed, the written exam was cancelled due to Covid. So, many of those applicants have applied again,” said an Army officer.

Another officer, however, pointed out that the number of applicants has not shown a significant increase despite the two-year gap due to Covid. “It should have at least doubled compared to 2020, as there was no recruitment for two years,” he said.

An officer pointed out that the increase in the number of applicants could also be due to the relaxation in the upper age limit, from 21 to 23 years, for this year.

An aspirant from Ropar, among the thousands lined up outside the ARO from 1 am, summed up the practical constraints. “Governments cannot understand what our families need. The Punjab government can afford to oppose, but we can’t. We are poor, we need income to run our homes. Serving in the Army for four years is better than sitting unemployed at home. We can always do some other work after getting an Army stamp,” he said.

Gurpreet Singh, 20, from Jagraon, was among those who cleared the physical test at Khanna. “I am pursuing graduation and have been preparing for the Army for the past three years. I cleared the physical test at Khanna in 2020 but the written exam was never held. I have applied again now. My father is a mason, he earns Rs 600 per day. I cannot afford to sit at home just because a new scheme has been launched. A government job is a government job,” he said.

Pardeep Kumar Sharma, 19, who has passed Class 10, said his mother works as a domestic help. “It was a setback when we heard of this four-year rule, but if I work hard, I can be among the 25 per cent who will be retained. I have to serve my country, and I cannot see my mother working in others’ homes anymore,” he said.So what if it is for four years, my father needs my support. He is an agricultural laborer earning Rs 10,000 per month and working in someone else’s field. We don’t have our own land. There is no other job available, so why not the Army,” said Satnam Singh from Khanna, who has passed Class 12.

Narinder Pal Singh, 19, said his brother works as a truck driver in Canada and his sister too went abroad. “Although my father is in Dubai, I want to serve my own country. My dream is to go to the borders of my country, not to any foreign land. For three years, I was preparing for this day,” he said.Most of the youths from Punjab are going abroad, but I would rather die than become a slave of foreigners. I will serve my own country,” said Pardeep Singh, who holds an automobile engineering diploma.