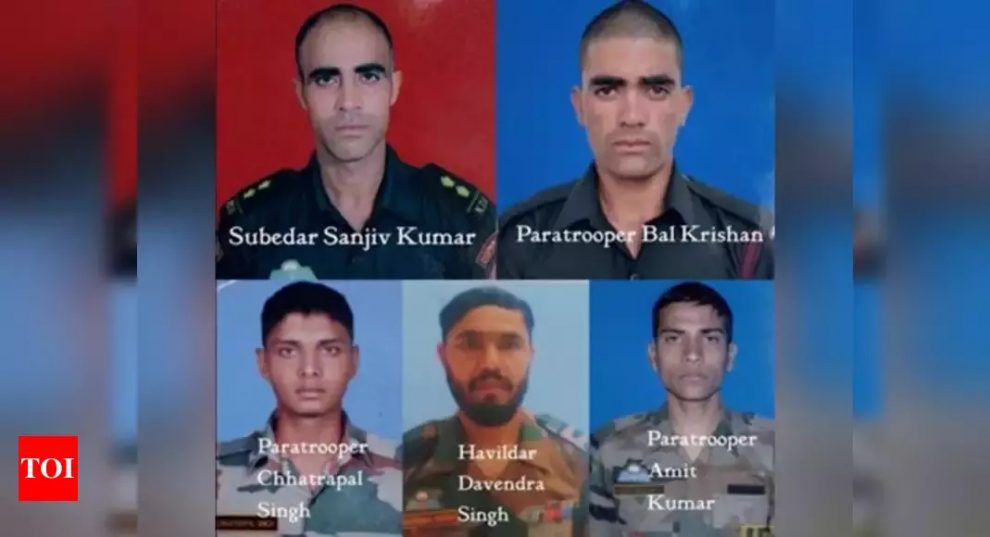 NEW DELHI: The five terrorists who had infiltrated across the Line of Control were killed in extremely close-quarter combat by the Army’s Special Forces (SF) commandos, who were air-dropped by helicopters on the snow-bound heights of the Keran sector in north Kashmir.
But the success in thwarting the largest infiltration attempt since the snow began melting in the mountain passes this year came at a huge cost, with five commandos of the elite 4 Para-SF battalion laying down their lives in the encounter at an altitude of around 10,000-feet on Sunday.
They were identified as Subedar Sanjeev Kumar, Havildar Davendra Singh and paratroopers Bal Krishan, Amit Kumar and Chhatrapal Singh. While three of them were killed in action at the encounter site, as was reported by TOI, the other two succumbed to their injuries in the military hospital at Srinagar hospital later.
Army sources said “Operation Randori Behak”, which also involved the use of helicopters and spy drones (unmanned aerial vehicles), was launched after the footprints of infiltrators were spotted in the Jumgund area near the LoC on April 1.
“The anti-infiltration fence had been submerged by the snow in the area, with all routes being cut off amidst the razor-sharp ridge lines there. During the intensive search operations, ‘contact’ was established with the terrorists four times but they managed to escape, once by jumping off a ledge,” said a source.
With the help of visuals obtained from UAVs, a few Para-SF squads were moved forward by helicopters into the area. Around daybreak on Sunday, the five-member squad being led by Subedar Sanjeev Kumar inadvertently climbed onto a cornice (an overhanging mass of hardened snow at the edge of a mountain precipice) while tracking the fresh footprints left behind by the terrorists, said the sources.
With the cornice collapsing under their weight, three of the five SF soldiers fell into a steep narrow valley. “As luck would have it, the five terrorists were hiding in that particular ‘nullah’…despite their fall, the three soldiers and the two others engaged the terrorists at virtually point-blank range in the ensuing hand-to-hand combat,” said the source.
“The five terrorists were shot dead in the firefight. While three soldiers were killed in action at the spot, the other two succumbed to their injuries after being airlifted to the hospital. The close combat can be gauged from the fact soldiers and the terrorists were found within two to three meters of each other at the site,” said the source.