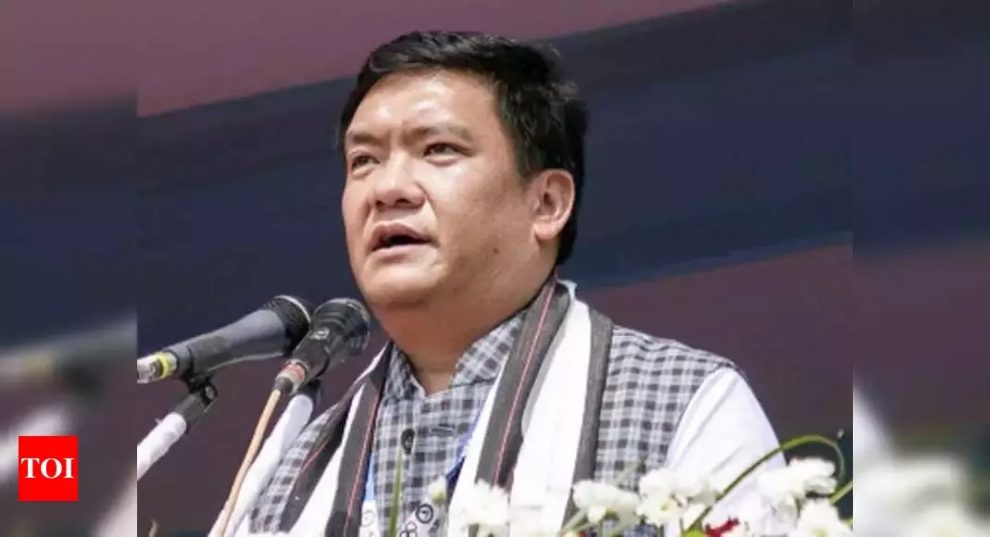 GUWAHATI: Arunachal Pradesh chief minister Pema Khandu found himself in an embarrassing situation after he had to delete a tweet from his official twitter handle saying that the nation-wide ‘lockdown’ will end on April 15 shortly after he participated in a video conference of Prime Minister Narendra Modi with all chief ministers to take stock of the situation in the aftermath of the COVID-19 outbreak on Thursday.
Realizing the gaffe, Khandu deleted the tweet within 30 minutes saying that it was put out by an officer handling his Twitter account, whose comprehension of Hindi was “limited”.
Arunachal Pradesh recorded the first Covid-19 case on Thursday after a man from Tezu in Lohit district, who had returnd from the Tablighi Jamaat tested positive.
More on Covid-19
“Completion of lockdown will end on April 15 next. But it doesn’t mean free will to move out on streets. We all must be responsible in slowing down. Lockdown and social distancing in the only way to fight #COVID19,” the tweet from his official handle said.
He deleted it minutes later and tweeted his clarification, “The tweet with respect of lockdown period was uploaded by an officer whose comprehension in Hindi was limited. And therefore same was removed.”
One hour later after deleting the mishandled tweet and issuing his clarification, Khandu sent out series of tweets on the lockdown and tagged Modi. “May not #21daysLockdownIndia go waste. Even after lockdown, follow corona prevention safety measures like wearing mask, cleanliness, distancing etc. Being responsible will save us. PM @narendramodi #IndiaFightsCorona”
His next tweet was, “Time is now to leverage technology to fight #coronavirus. Let us not compete to announce packages! It is for all of us to be realistic and practical. The fight could go for any length and we can’t predict how things will turn. PM @narendramodi #IndiaFightsCarona.”
Tagging the Prime Minister, he again tweeted on hour later, “This is a fight which must be fought by each of us. This is a war which cannot be left alone to health workers, policemen or the govt. Time is now for all different ideologies to unite to defeat the enemy of mankind. PM @narendramodi #IndiaFightsCorona.”
“War has just began now. We can never be contended. Let us no mistake. Every 24 hours we must be alert; unitedly we must fight to defeat the outbreak of #COVID19. PM @narendramodi @MoHFW_INDIA,” he said in his next tweet.
He also thanked the prime minister for his “exemplary leadership” in tackling COVID-19 pandemic in the country.

NCW gets SOS from women facing violence at home during lockdown
Covid-19: NE tally rises to 24 with 5 new cases in Assam, Manipur and Arunachal

16-year-old daughter raped and tortured by Father in Dehradun