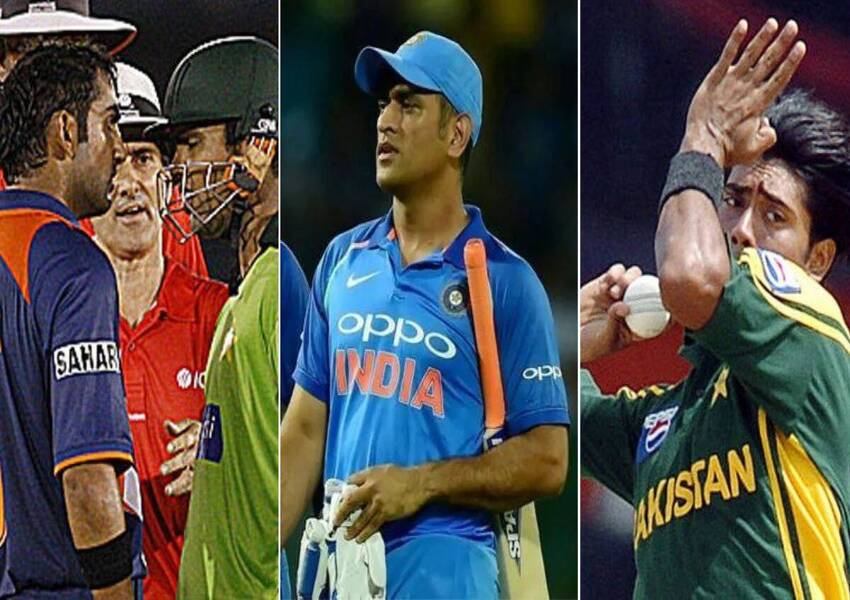 While bilateral cricket remains suspended between the arch-rivals India and Pakistan who play each other only in multi-team tournaments, the fiery contests have always thrown up several spicy moments to remember. Here is a look at five controversial moments that made the headlines in Asia Cup’s previous editions

Former Indian opener Gautam Gambhir and veteran Pakistan keeper-batter Kamran Akmal’s ugly spat occurred during a tense run-chase in the 2010 edition of the Asia Cup in Sri Lanka. Chasing a target of 268, Dhoni-Gambhir stitched a 98-run third-wicket stand when the heated exchange broke out after a caught-behind appeal from the Pakistani wicketkeeper Akmal was turned down.  At the ensuing drinks break, Gambhir had a spat with Akmal and Dhoni had to step in to take Gambhir away and ease the tension.

On being asked the main reason behind the heated exchange, Gambhir, on a talk show with Vikram Sathaye, had said, “I missed it fully. He appealed in such a way that he thought that the ball hit the bat. Then I told him that there is no point in appealing because nothing like that happened, we just got into a heated argument and then it just got from bad to worse.”

Another such incident occurred in the same 2010 edition when Pakistan pacer Shoaib Akhtar and India off-spinner Harbhajan Singh clashed in the final overs of the match. It boiled over after  Harbhajan smashed a six off Akhtar in the 47th over.  The fiery speedster unleashed two snorters at the ribcage and the two exchanged some words. Later, after winning the game, Singh also made some aggressive gestures toward Akhtar.

Later in a video interview on the Helo app, Akhtar revealed that he was so furious with Harbhajan that he had gone to the hotel after the game to pick up a fight with the India off-spinner.

Ahead of the Asia Cup final in 2016, a morphed image of Bangladesh’s Taskin Ahmed holding MS Dhoni’s severed head created a massive storm on social media. The picture was uploaded on Twitter after Bangladesh stunned Pakistan to set up a summit clash with Dhoni and Co.

Prior to the finale, the then India head coach Ravi Shastri had reacted to the incident and said, “It’s not our job to look at newspapers, our job is to play cricket. It’s your job to find out what stories are getting published in the dailies. When we play cricket, we do not concentrate on newspaper articles. So you all can make your own assessments by reading those stories.” In the final, Dhoni flayed the Bangladeshi bowlers as India romped home comfortably.

The 2016 edition of the Asia Cup was also marred by a few dodgy umpiring decisions. In one such incident ‘captain cool’ MS Dhoni lost his temper after Pakistan’s Khurram Manzoor was given not out even after he gloved the ball off Ashish Nehra during a high-octane India vs Pakistan match. Television replays suggested that the ball hit Manzoor’s gloves before it was caught by Dhoni. A visibly upset Dhoni had a chat with the Bangladeshi umpire Sharfuddoula Ibne Shahid on the field when India’s vociferous appeal was turned down. After the game, Dhoni expressed concerns that the earpieces might be impeding the umpire’s hearing and on-field performance.

5. Mohammad Sami bowls an over to forget

In the Asia Cup match between Pakistan and Bangladesh in 2004, Pakistan’s Mohammad Sami opened the bowling with Shabbir Ahmed. He started with a maiden over but followed it up with a horror: a 17-ball over which included seven wides and four no-balls.

IND vs ZIM 3rd ODI Live Streaming: When and where to watch match live?
Under Virat Kohli India led the way in development of Test cricket, says Graeme Smith