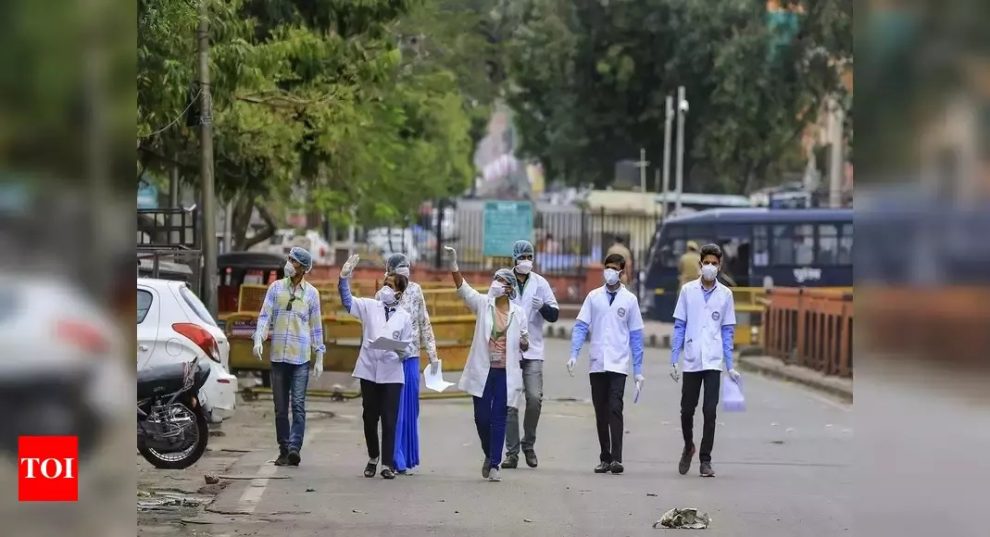 NEW DELHI: Led by a rush of cases in Kerala, the daily count of new Covid-19 infections in the country zoomed past 100 for the first time on Friday. As many as 120 fresh cases were reported from states, 39 from Kerala alone, taking the total number to 850 so far.
The previous highest single-day count of cases, as per confirmed reports received by TOI from states, was 99 on Monday (March 23).
Kerala’s Kasaragod hurtled towards a health crisis as 34 of the new cases were reported from the district, which has emerged as one of the top coronavirus hotspots in the country. Kerala also became the first state to report Covid-19 cases from each district.
The health ministry has confirmed 808 Covid-19 cases and said 67 patients have recovered. Delhi, meanwhile, reported one fresh case, taking the total to 40.
Bhilwara in Rajasthan, another coronavirus hotspot, confirmed its second death in two days, that of a 60-year-old who died late Thursday night. Neither of the two victims was a healthcare worker. The second Covid-19 death reported on Friday was from Tumukuru in Karnataka.
In Mumbai, an 85-year-old surgeon-cum-urologist died of suspected coronavirus early on Friday, even as his 50-year-old cardiac surgeon son, who was operating on patients till Wednesday, is said to have contracted the infection.
The news of the Mumbai surgeon possibly being infected with Covid-19 started a scramble to trace contacts across two of the city’s major hospitals. The test result on the deceased doctor is awaited.
In another suspected Covid-19 death, a 60-year-old Yemen national died in a private Delhi hospital. His confirmatory test results are awaited.
Meanwhile, Maharashtra continued to report a high number of patients, with 17 testing positive on Friday. Twelve of these were from a single family in Islampur, near Sangli. As many as 24 members of the family have so far tested positive after four of them returned from Saudi Arabia on March 14.
In the midst of the increasing number of cases, Michael J Ryan, WHO’s executive director of health emergencies programme, said that a surge in numbers wasn’t necessarily a bad thing. “Having a larger number means that I know where the virus is more active, Ryan said, addressing a press briefing from Geneva.
In Delhi, the number of Covid-19 cases stood at 40, with only one positive case – a 33-year-old with travel history to Philippines – reported on Friday. CM Arvind Kejriwal said the state had blue-print ready to deal with upsurge in cases.
Among the new cases in Karnataka was a 10-month-old baby, who became the youngest person in the country to contract the disease. On the brighter side, the first Covid-19 patient of the state, a 46-year-old techie and his 13-year-old daughter, were declared cured and discharged on Friday.
West Bengal reported five new cases of Covid-19, including a nine-month-old child, probably the youngest in India, taking the state’s total to 15.
Eight days after Gujarat tested its first two positive cases on March 19, the state recorded its lowest daily positive of three cases on Friday. All three COVID-19 patients are from Rajkot taking the total tally to 47, officials said.
Uttar Pradesh confirmed four new cases taking the state’s total to 50. Noida and Agra remain the worst affected regions in UP.
Rajasthan reported seven new Covid-19 cases, taking the state’s total to 50. Two new cases were reported from Bhilwara. So far, five persons have recovered from Covid-19 in the state, including two patients from Jodhpur, two Italian tourists and one 85-year-old person who returned from Dubai to Jaipur.
Two more Covid-19 positive cases were reported in Bihar on Friday, taking the total number of such cases to nine across the state.