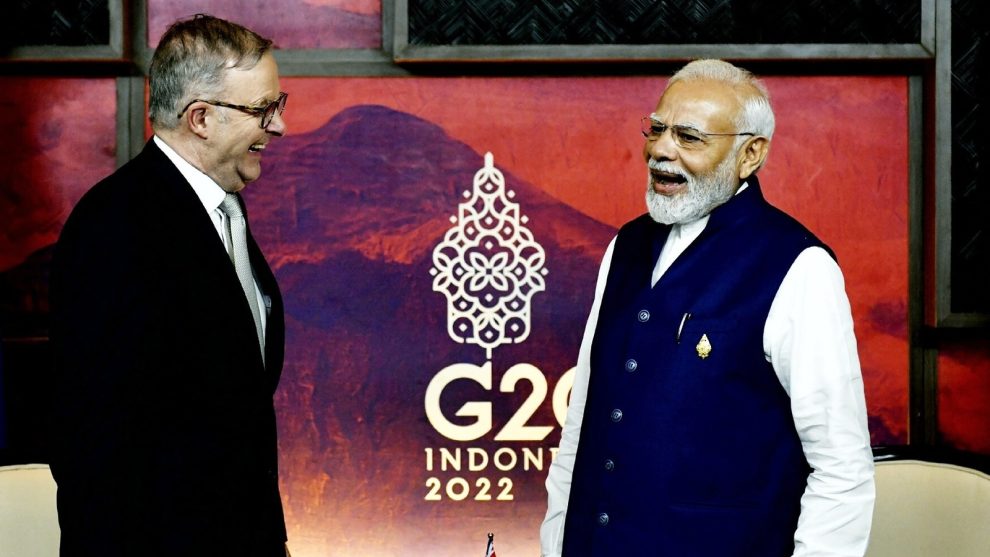 Australian Prime Minister Anthony Albanese announced that he will visit India next year in March to lock India-Australia Economic Cooperation and Trade Agreement (ECTA) deal and upgrade the relationship, according to the statement released by the Australian PM.
While addressing the presser, PM Albanese said on Wednesday (Local Time), ” I also met with Prime Minister Modi of India, where we discussed the finalisation of the closer economic cooperation agreement between Australia and India, which we regard as being very important for expanding the economic relationship between Australia and India. I will visit India in March. We’ll take a business delegation to India. And that will be an important visit and an upgrade in the relationship that we have between our two nations.”
This announcement came on the sidelines of the 17th edition of the G20 summit.
He further said that Prime Minister Narendra Modi will visit Australia next year for the Quad Leaders’ meeting. And then he will return to India later in the year for the G20 Summit, the statement added.
North Korea missile had the range to reach US mainland, Japan says: Top points
“We also spoke about the details of the Quad Leaders’ meeting that will take place next year,” the Australian PM added.
On November 1, Commerce Minister Piyush Goyal held a virtual meeting with Australia’s Trade and Tourism Minister HE Don Farrell. In the meeting, Goyal said that the early implementation of the India-Australia ECTA was in the best interest of both countries.
During the meeting, both delegations reviewed and appreciated the progress made in the ratification of the IndAus ECTA, which was signed on April 22, 2022.
Recently, PM Modi met the Australian PM on the sidelines of the G-20 Summit in Bali and reiterated their stand for a shared and peaceful Indo-Pacific region amid Chinese assertiveness.
“The Leaders exchanged views on regional and global issues of mutual interest, which included their shared vision for a stable and peaceful Indo-Pacific Region, climate-related matters and India’s G20 Presidency,” read Prime Minister’s Office press release.
(Except for the headline, this story has not been edited by GOVT.in staff and is published from a syndicated feed.)