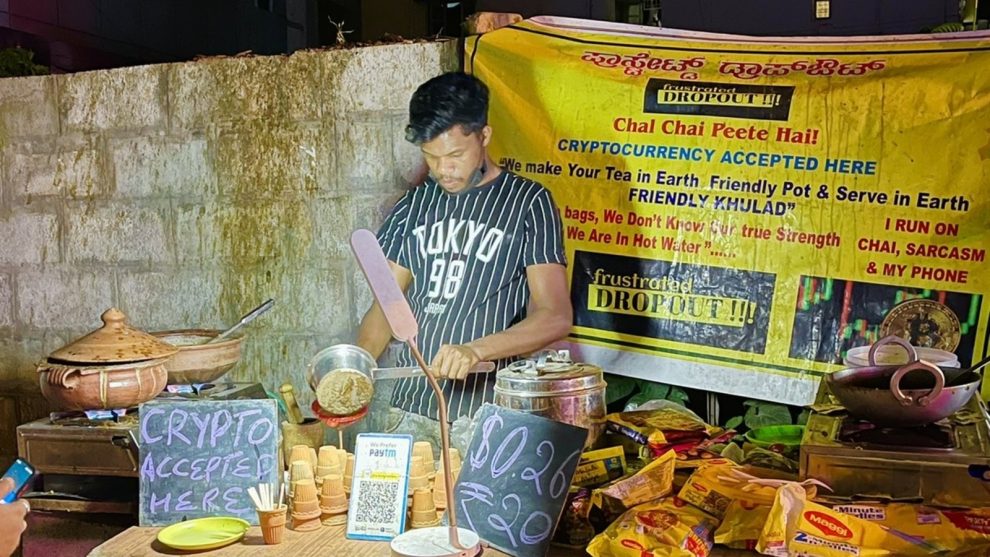 A tea stall owner in Bengaluru is grabbing all the eyeballs after accepting cryptocurrency as payment at his tea shop. His roadside tea stall titled ‘Frustrated dropout’ turned out to be popular in the tech capital after his story went viral on social media.

A Twitter user named Akshay Saini shared a photograph of him on Wednesday and wrote, “Just Bangalore things. #crypto #NammaBengaluru(Sic)” The picture is all over the internet and people have so many questions about the ‘Frustrated dropout’ already.

A user asked, “How does he accept crypto? Which all coins are accepted? How does he decide the exchange rate? I have so many questions (Sic)”

Another user wrote “If you know this guy, pass him another idea: “NFT chai” –own the chai you drink. (Sic)”

According to the report in The New Indian Express, the tea seller who is accepting crypto is Shubham Saini. He started his tea stall at Marathahalli of Bengaluru with an initial capital of ₹30,000. The report also said that he started this tea stall after he lost a huge amount as a crypto trader when the market plunged in the year 2021.

Saini has placed a placard where he updates the prices after comparing the US dollars to Indian rupees for the crypto payments.