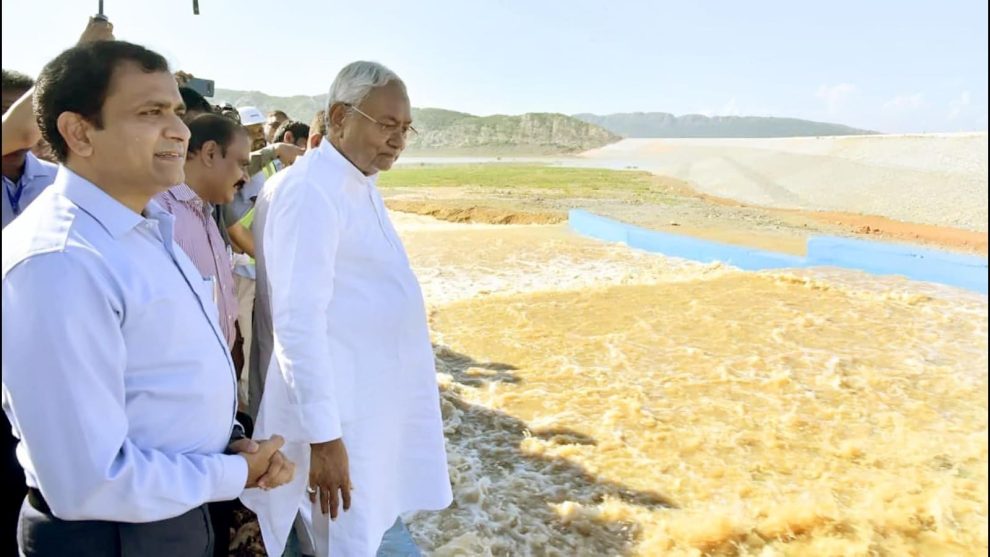 Bihar chief minister Nitish Kumar will dedicate the ambitious Ganga Jal Apoorti Yojana or the Ganga water supply scheme (GWSS) under the state’s Jal-Jeevan-Hariyali initiative to the people at Rajgir on November 27 and at Gaya and Bodh Gaya on November 28, said Water Resources Department and IPRD minister Sanjay Kumar Jha.
This will be the second major water project in the region. In September, Kumar had inaugurated India’s longest rubber dam ‘Gayaji Dam’ on the sacred Falgu river ahead of the Pitripaksha Mela, which draws lakhs of pilgrims from across the country and abroad to pay homage to their ancestors. The dam has been built at an estimated cost of ₹324 crore. Experts from the Indian Institute of Technology (IIT) (Roorkee) were involved with the project. There will be enough water in the dam round the year for the convenience of the pilgrims.
Jha said that the first phase of the GWSS scheme involving Gaya, Bodh Gaya and Rajgir has been completed in a record time of less than three years despite disruptions caused by Covid-19 pandemic, while the second phase covering Nawada district would be completed by 2023. The estimated cost of the project to ensure drinking water to over 40 lakh population in the water-alarmed southern part of the state is ₹4,500 crore. The project, earlier known as Ganga water lift project, was approved in December 2019 and the state Cabinet had sanctioned a budget of ₹2,692 crore. Officials said that the work on the Nawada phase is also underway and is expected to be completed by June.
“These areas have been perennially water stressed, with ground water level dipping alarmingly in the last two decades. Therefore, the scheme to take Ganga water to the people means a lot. It is a one-of-its-kind project in the country to pump surplus floodwater of river Ganga to the water-stressed cities for drinking purpose through a 191-km pipeline. Water supply will be done after treatment in the concerned towns. Bihar faces the double whammy of flood in one region and drought in the other,. The scheme will be a game changer for the state that faces the unpredicatbiltiy of weather the most. It has to grapple with floods even with inadequate rain and all the water flows out without benefiting the arid regions,” the minister said.
Maintaining that the scheme will be helpful in recharging the falling water table and drying water bodies, aid green cover in Gaya, Rajgir and surrounding areas to ensure ecological balance, Jha said the chief minister has been particular about it from the outset and reviewing its progress at regular intervals. “The tourist destinations of Gaya and Bodh Gaya, which draw a large number of international visitors, had to suffer a lot during peak summer, which will not happen now,” he added.
The trial run of supplying the Ganga water to Gangaji Rajgrih Reservoir, constructed in Rajgir, was completed on July 7; to Tetar reservoir in Gaya on October 8, while the same was achieved for the tank reservoir and water treatment plant at Abgilla on October 14. The surplus Ganga water is lifted and transported through pipeline to an intake well-cum-pump house near Hathidah ghat in Mokama area of Patna and then taken to the arid towns through pipeline where storage points have been developed.
Though some experts are apprehensive about the viability of the project in the long run and its impact on the Mokama tal area, which is the pulse producing region, besides the river ecology, Jha said the project was started only after extensive study and would have only positives.
(Except for the headline, this story has not been edited by GOVT.in staff and is published from a syndicated feed.)