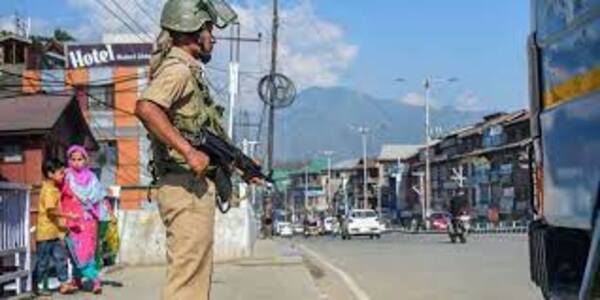 Farooq Ahmed Dar aka Bitta Karate’s wife Assabha Arzoomand Khan was a 2011 batch officer of the Jammu and Kashmir Administrative Service and Syed Salahuddin’s son Syed Abdul Mueed was the IT manager at the J&K Entrepreneurship Development Institute. The other two, Muheet Ahmad Bhat and Majid Hussain Qadri were employed as a scientist and assistant professor, respectively, with Kashmir University.

The four were dismissed under Article 311 of the Constitution, under a provision that empowers the government to remove an employee without initiating disciplinary proceedings, a senior government official said.

The action against the four is part of a continuing effort started two years ago by the Jammu and Kashmir administration to identify employees linked to terror groups. About 35 people have been removed from service for alleged links to terror groups and for working as overground workers for them.

The official said it is unclear how Assabha Arzoomand Khan managed to stay under the radar for so long and came into the spotlight only after Karate’s trial started. Preliminary investigations into her background revealed that she first got a job at the Sher-e- Kashmir University of Agricultural Science and Technology in 2003. “Her appointment was made through the backdoor and it appears to have been managed by someone in the administration,” the functionary quoted above said, asking not to be named.

She was allegedly absent from work for months on end between 2003 and 2007 but no action was taken against her. “During her absence from work, she travelled to Germany, the UK, Helsinki, Sri Lanka and Thailand. Investigations revealed that she was working as a cash mule for JKLF and while her departure was from airports, her arrival in India was mostly through the land route, from Nepal and Bangladesh,” the functionary said.

In 2011, she cleared the JKAS exam and married Karate, who in an interview three decades ago, accepted killing “many Hindus and Muslims” when militancy erupted in the Kashmir Valley.

Syed Salahuddin’s son Syed Abdul Mueed also got his government job under suspicious circumstances. “He was suspiciously appointed in 2012 as an IT consultant on a contractual basis… the rules were circumvented. His contractual position was subsequently converted into a permanent one. No mandatory CID verification was done in his case,” the functionary quoted above said.

Security agencies have claimed that Abdul Mueed played a key role in offering logistical support to terrorists during attacks carried out in and around the JKEDI complex in Pampore.

His two brothers, Syed Ahmad Shakeel and Shahid Yousuf, who also got their government jobs by circumventing rules and procedures, were also dismissed from service for terror links last year. They are now facing trial.

Kashmir University scientist Muheet Ahmad Bhat is accused of playing a key role in organising and funding street protests for years. A government functionary said Bhat, who was with the department of computer sciences, was an executive member of Kashmir University Teachers Association from 2017 to 2019 and its president from 2017 to 2019. “He played a key role in organising student protests and street protests in 2016 in which more than a hundred died and thousands were injured. As a member of KUTA, Bhat distributed KUTA funds to stone pelters and some families of terrorists. In January 2018, he provided financial assistance to families of LeTterrorists,” the functionary said.

Majid Hussain Qadri, the Kashmir University teacher sacked by the government, is alleged to have been working for terrorists for nearly two decades. According to security agencies, Qadri came in contact with two Pakistani LeT terrorists in August 2001 and became LeT’s point-person for Kashmir University to carry out radicalisation and recruitment.

“In 2002 he was tasked to act as an arms courier for terrorists. In 2003, he was assigned the position of spokesperson of LeT and continued till his arrest in June 2004. A sniper rifle was also recovered from him. He was detained under PSA for two years and subsequently acquitted by the court.”The functionary said Qadri was acquitted because of “failure of investigation and prosecution”.In March 2007, he was appointed as a contractual lecturer at Kashmir University. His case was never sent to the CID for character verification and was appointed as an assistant professor at Kashmir university in 2010. He is presently working in the department of management studies,” the functionary said.