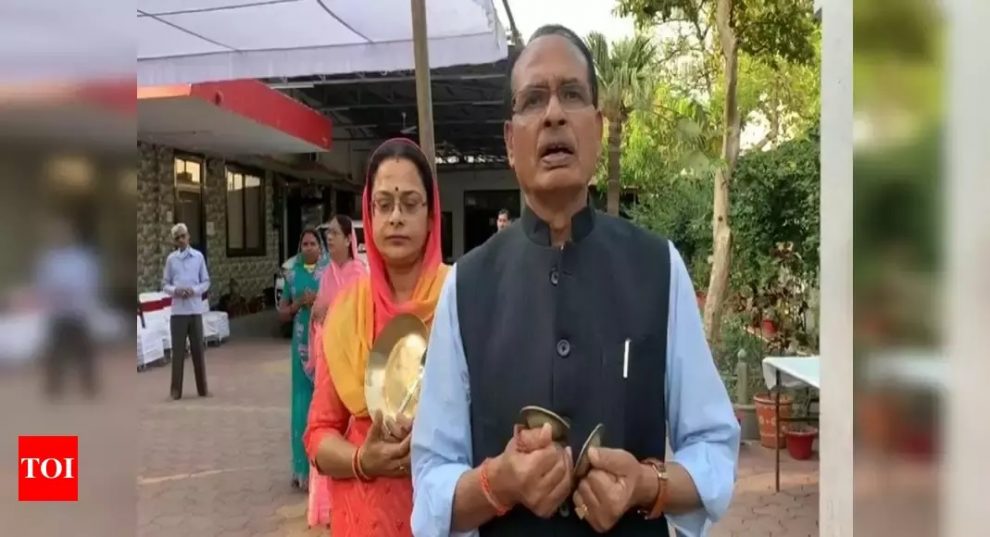 BHOPAL: BJP leaders across the state rang bells, clanged cymbals, blowing conch shells and clapped at their residence at 5 pm as part of social distancing to check the spread of the deadly coronavirus as the Prime Minister Narendra Modi suggested.
Former chief minister Shivraj Singh Chouhan observed Janata Curfew and clanged cymbals to send a message of appreciation to all the professionals – nurses, doctors, cleaners, transport workers, police personnel, journalists and others – who have been helping us in battling the contagion coronavirus as it spreads across the country.
“We should be vigilant and thankful to all those who have been helping us to fight the corona spread. We all members of the family are sending the message as suggested by Prime Minister Narendra Modi,” said Chouhan.
Chouhan, who is also learnt to have spoken to Prime Minister Modi said, “Discussed in detail about corona spread. The Prime Minister is keeping vigil on the situation in Madhya Pradesh. He has approved Rs 350 crore budget for virus control for the state which would be utilised by the collectors against corona spread. I am thankful to him,” he said.
State BJP president, V D Sharma, who passed his daytime doing yoga while observing Janata Curfew, blew conch shell as the clock struck 5 pm. He also appealed to the governor Lalji Tandon and the acting chief minister Kamal Nath for a strict vigil to control coronavirus and said that BJP will extend all its possible support and cooperation to control the virus.
BJP chief whip Narottam Mishra shares his video clip on social media blowing a conch shell while the former minister Sanjaya Pathak shared his video with his family members ringing bells and beating `thalis’ in appreciation towards the professionals.
Governor Lalji Tandon also shared a video of his blowing a conch shell and ringing bell at Raj Bhawan. “We are all thankful to those who are providing essential services during corona scare. The entire country has expressed unity and solidarity towards the mission to eradicate the virus,” he said.
A video shared by former union minister Jyotiraditya Scindia showed him clapping with the family members at his Delhi residence. Union minister Narendra Singh Tomar also posted his video with wife, beating `thali’ and blowing a conch shell.

Raksha Bandhan 2022: Make your festival eco-friendly with these edible rakhis