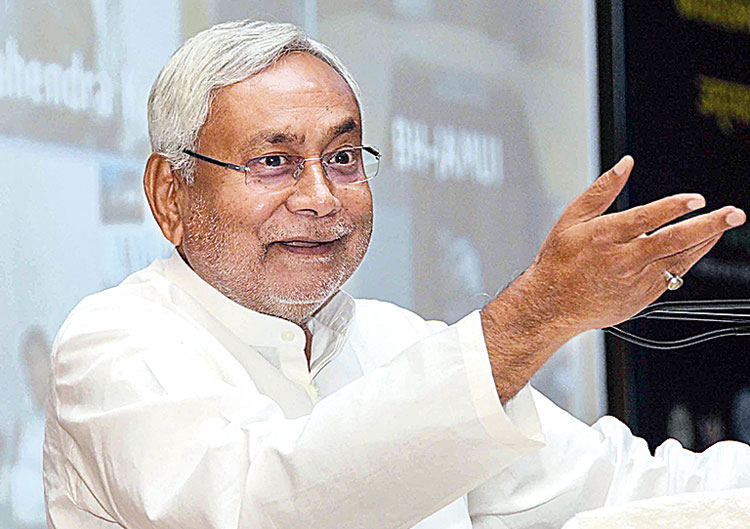 The BJP is understandably miffed at the turn of events after Nitish Kumar yet again held his Bihar CM post for the eighth time despite switching sides.Old videos of Kumar are floating around on social media of his statements he made in the past after severing ties with the RJD as well as with the BJP at regular intervals since 2013.

In one stroke, friends have turned foes and vice versa. But that is Nitish Kumar for you, ambitious, manoeuvring and with sharp political acumen to be one up on an otherwise calculated BJP. He remained silent till he had to speak and when he spoke, the BJP was left cursing him for repeating 2013. The BJP, though, should not be surprised, as this is not the first time Nitish Kumar has done it and such things keep happening in politics to seize advantage. It may also not be the last time. They should have read it and if they couldn’t, it is their fault. In Bihar, shortcuts to power don’t last. At the national level, it is too early to say if Nitish factor will have any impact,” said social analyst Prof NK Choudhary.Choudhary said that continuing with Kumar despite getting more seats and popular opinion within the party to have a BJP CM reflected lack of confidence on part of the BJP, where it does not have a leader. “This is what happens if one does not have self-confidence. Kumar felt he was made to suffer in 2020 assembly polls under a conspiracy, and he did not forget it, which BJP wanted him to. With a chair assured on either side, he did not have problems walking away once again. It is BJP’s sheer miscalculation, and they should accept it. They never tried to expand their organisation in Bihar like they did in other states. They will now have a real challenge at hand in 2024,” he added.Political analyst DM Diwakar said that in the present-day politics, principles and ethics matter for no party and the BJP would gain nothing from who did what he is capable of to run them out in the slog overs once again for his advantage.

The new RJD-JDU alliance has happened at a time when all the parties have got down to prepare for the 2024 Lok Sabha elections, leaving BJP with very little time to gear up for the formidable challenge it faces. They may hope that Nitish Kumar breaks alliance with RJD also at some stage, as it will give them advantage in triangular fight. But just being hopeful does not work in politics. They should not lose sight of 2015 state polls at the peak of Narendra Modi wave, when Grand Alliance made it a one-sided affair due to the simple electoral arithmetic that Bihar presents. The timing of this alliance means that it will at least last till 2024 and hoping against hope for it to crumble yet again will not help BJP prospects,” he added.

Diwakar said that union home minister Amit Shah apparently underestimated Kumar, who was looking just for the right opportunity ever since his party was dwarfed in 2020 to be relegated to the third spot due to LJP’s Chirag Paswan.

“Now it is not a question of how much Kumar gains. He has gained enough. Now the moot point is how much he would make the BJP pay with not much to lose in his political career spanning almost two decades. The BJP will do good to set its own house in order in the state. It failed to present a creditable leader to replace Kumar. Many leaders in the BJP must be also happy with what has happened, as they felt like being sidelined,” he added.

However, BJP state chief Dr Sanjay Jaiswal said the BJP of 2022 should not be mistaken for the BJP of 2015 in the state.

“Today, the state unit is more organised and has an effective presence down to every booth. We don’t have any worries for 2024. BJP is a worker-based party and it does not believe in a single face. Nobody knew Yogi Adityanath or Manohar Lal Khattar would become CM until they became one. But one thing is certain that RJD could dump Kumar sooner or later, as a leader is known by his character. Hitherto he dumped others for the sake of chair. Now, time has come for him to be dumped,” he added.

BJP national organisational secretary Rituraj Sinha said it was laughable that Kumar, driven solely by his personal ambition, was eyeing PM’s chair, and still doesn’t have the courage to admit it.

“He should also vie for the President’s chair in 2027. It is a fact that the BJP erred in trusting him, but for the party that has grown due to its committed workers, it is an opportunity they will take as a challenge. The BJP backed him even in 2000 when Kumar’s party had just 36 seats and this time it again backed him despite JD-U getting only 43 seats. But he is adept at playing with the trust of everyone. In politics, leadership requires credibility, which Kumar has completely lost and it is now the beginning of the end of JD-U. There is an old saying that “in politics there are no permanent friends and enemies, the only permanent thing is interest. Nitish Kumar is a personification of this,” he added.

Maintaining that Kumar’s graph has been steadily on decline – from 115 seats in state polls for JD-U in 2010 to 75 in 2015 and 43 in 2020 – he said that blaming others for one’s failures and falling popularity will not help.“The JD-U should be worried as to how many of its 16 MPs, who won in 2019 as NDA candidates, will win without Narendra Modi. In Bihar, people voted for Modi’s work in 2019, rising above caste-based politics. Those who cannot think beyond caste would always think on those lines and live in 2015, but it is Modi’s work, which has directly touched the lives of 20crore Indian families, that will speak again. In 2015, Narendra Modi had spent just a year in office, but now he has a lot to show, and his popularity is only growing. What will Kumar tell nearly 65-lakh people who voted for JD-U candidates as part of NDA?” he added.

Senior JD-U leader and former minister Vijay Kumar Choudhary said that Kumar has repeatedly dwelt on the circumstances that forced him to change track and that was enough to get a clearer picture. “In a democracy, all parties have the right to weigh their options. His silence was seen as his weakness, which was wrong. Kumar works silently and lets his work make all the noise. He does not let the noise from outside distract him, as he has an uncanny knack of setting his decibel limits. If he has remained the longest serving CM in Bihar, it is not without a reason,” he added.