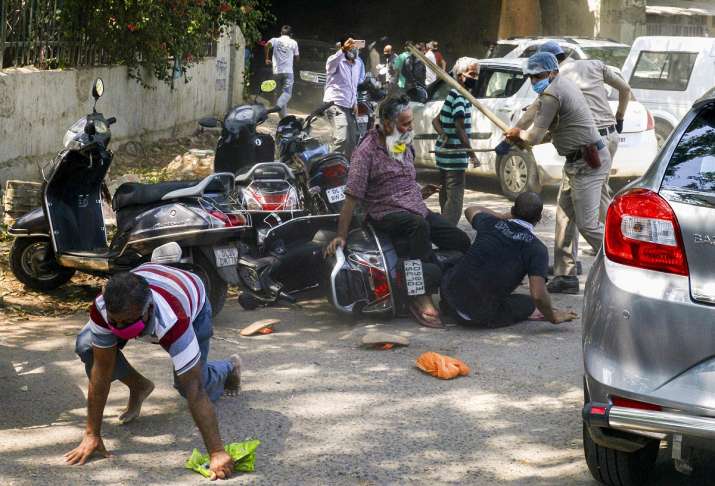 A flood of people after a long dry spell. Queues, chaos and lathicharges marked Monday even as some states reported a high in excise earnings as liquor shops reopened.
In Mumbai, a five-hour flip-flop within the bureaucracy over whether liquor shops be allowed to open left people waiting till 3pm, when the order finally came. However, many had to return empty-handed as majority of owners decided to open only on Tuesday morning.
In places like Solapur city and Aurangabad, the district administrations did not allow liquor shops to reopen at all.
Bengaluru saw serpentine queues, and flouting of social distancing norms. Many hired people to stand in for them. The city also saw a large number of women standing in queues though many said they felt uncomfortable with men around. Some complained about being jostled around and even jeered at by men in queues. A few liquor stores in Kaggadaspura, Whitefield and Electronics City, which saw a reasonable footfall of women, decided to form a separate queue for them.
Elated shop-owners went out of their way to welcome customers. In Kolar, in Karnataka, when 75-year-old Lakshmamma, a habitual drinker, walked up to a liquor shop, the shop owner wanted her to be the first customer as her name meant “Lakshmi.” A video showed a shop owner showering flower petals on customers In UP’s Mirzapur.
Social distancing went for a toss in Kolkata too, forcing cops to resort to mild lathicharge at some places.
In Vijayawada in Andhra Pradesh, people drew parallels with the frenzy seen following Cyclone Hudud in 2014. “I had seen long queues in front of liquor outlets a day after the cyclone. It was the same on Monday,” said a Vijayawada resident.
In Rajasthan, chaotic scenes were witnessed in front of most liquor shops, forcing the excise department to order closure of shops within two hours of their opening. Authorities are now planning to deploy excise police and introduce a token system.
Like Mumbai, people in Chandigarh too, had to wait till noon as there were no instructions from the excise department.
Cities in Uttar Pradesh too saw long queues. Excise department officials said a sale of over Rs 100 crore was recorded on Monday against an average daily sale of Rs 70-80 crore. State capital Lucknow witnessed a sale of Rs 6.3 crore during the day, though the duration of sale was four hours less.
Reports from across the state suggested that many shop owners had to shut by afternoon after they ran out of stock.
In Raipur, as thousands stood in the sweltering heat to buy their quota of booze, the government offered a solution — an app for home delivery, but only in green zones.
Women in Mahasamund district of Chhattisgarh staged a protest against the government’s move to open liquor shops. They said the liquor shutdown had brought peace to families.
(With inputs from Mumbai, Bengaluru, Chandigarh, Lucknow, Kolkata, Jaipur, Vijayawada, Bhopal & Raipur)