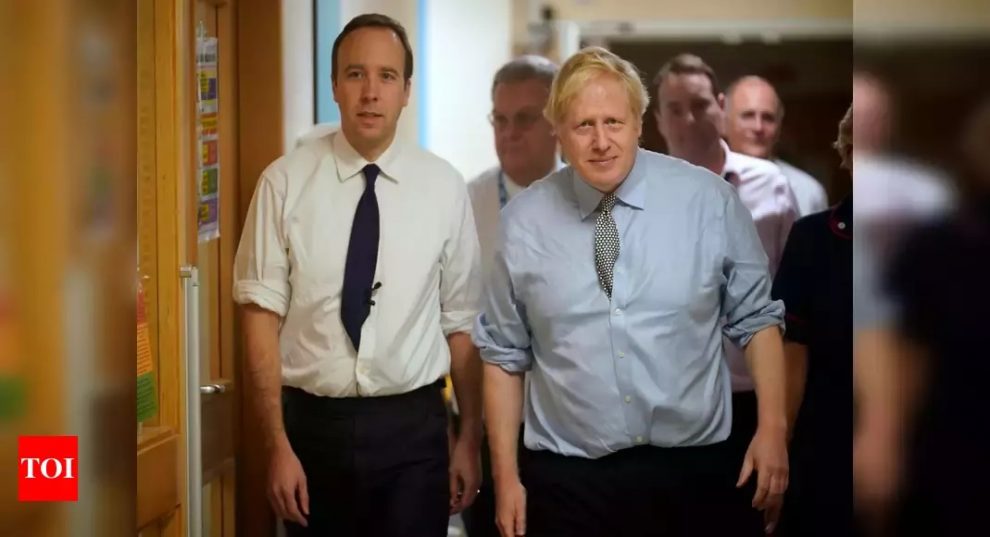 LONDON: British Prime Minister Boris Johnson said on Friday that he has tested positive for coronavirus after experiencing “mild symptoms”, becoming the first world leader to announce the infection.
Minutes after Johnson’s announcement, his health secretary Matt Hancock tweeted that he too was infected and was in self-isolation.
In a video message posted on Twitter, the 55-year-old Johnson said he will continue to lead the UK government’s response to the deadly virus, which has claimed 578 lives in the country.
“Over the last 24 hours I have developed mild symptoms and tested positive for coronavirus,” Johnson said on Twitter.
“I am now self-isolating, but I will continue to lead the government’s response via video-conference as we fight this virus. Together we will beat this,” he said.
Hancock, who is a key member of Johnson’s coronavirus “War Cabinet”, said in a video message that he will be self-isolating until Thursday.
“Following medical advice, I was advised to test for coronavirus. I’ve tested positive,” Hancock posted on Twitter.
The 41-year-old minister said: “Fortunately for me, the symptoms so far have been very mild so I’ve been able to carry on with the work driving forward the UK response.”
The two announcements sent shockwaves across the top rung of the UK government, with most senior ministers and civil servants in and out of 10 Downing Street as they work to curb the spread of the pandemic.
There are more than 11,600 confirmed cases of coronavirus in the UK, and 578 people have died – a jump of 100 in a single day on Thursday.
UK Foreign Secretary Dominic Raab, who has previously tested negative for the deadly virus after displaying cough symptoms, will be the next in command in case Johnson has to take some time off if he gets more ill.
The news comes just days after it was confirmed that Prince Charles had been diagnosed with COVID-19 but was displaying similarly mild symptoms. Clarence House said the 71-year-old heir to the British throne was self-isolating in Scotland and remained in “good health” as he continued to work from home.
Earlier this week, the prime minister’s spokesperson had confirmed that if Johnson was unwell and unable to work, Raab, as the First Secretary of State, was the selected minister to stand in.
“But be in no doubt that I can continue, thanks to the wizardry of modern technology, to communicate with all my top team to lead the national fightback against coronavirus,” Johnson stressed in the video message posted on his Twitter account.
The other cause for concern within Downing Street quarters would be for Johnson’s pregnant fiancée Carrie Symonds, who is expecting the couple’s child in a few months’ time.
It is not known if she would move out of Downing Street to self-isolate separately because pregnant women generally are advised to follow social distancing more stringently, and minimise social contact for up to 12 weeks.
The UK prime minister tried to reassure the British public as he revealed that he had a temperature and a persistent cough as part of the mild symptoms of COVID-19 and stressed that he and the country will “get through it” by applying the measures he had announced earlier this week.
He repeated his call for everyone to “stay at home, protect the National Health Service, and save lives”.
Sounding optimistic and insisting that “we will win”, he used his message to also thank the NHS, which is at the frontline of the medical fight against the rapid spread of COVID-19, and said he had been moved by a national effort on Thursday night when people across the country stepped out of their homes to clap their hands in appreciation for the NHS.
“It was very moving last night to join in that national clap for the NHS. But it’s not just the NHS, it’s our police, our social care workers, teachers, everybody who works in schools, DWP [Department for Work and Pensions] staff… I want to thank everybody who’s working to keep our country going through this epidemic,” he said.
A Downing Street spokesperson said that after experiencing mild symptoms on Thursday, the prime minister was tested for coronavirus on the personal advice of England’s Chief Medical Officer, Professor Chris Whitty. The test was carried out in No 10 Downing Street by National Health Service (NHS) staff and the result of the test was positive.
“In keeping with the guidance, the prime minister is self-isolating in Downing Street. He is continuing to lead the government’s response to coronavirus,” the spokesperson said.
Meanwhile, the mother of Prince Charles, Queen Elizabeth II, remains in isolation in Windsor Castle and it has been confirmed that she last met Johnson for one of their regular meetings on March 11.
While it is unconfirmed if the 93-year-old monarch has been tested so far, her aides would be relieved at her exposure now over the 14-day mark, believed to be the incubation period of the virus.