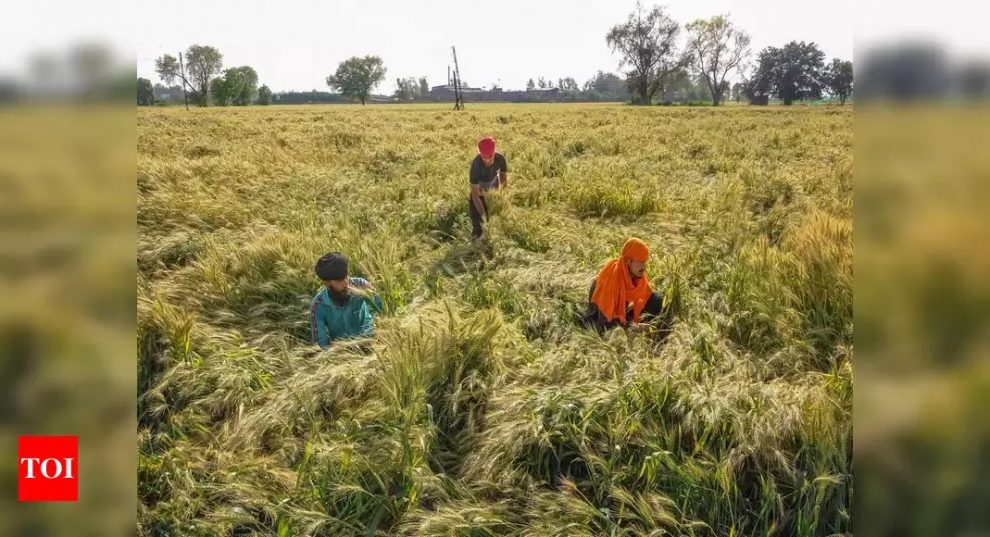 NEW DELHI: Exemptions to farmers during the lockdown period have eased farming operations a bit, but ground situation continues to be difficult for transporting farm produce to ‘mandis’ and for movement of farm workers as local authorities are observing extreme caution, considering the need for social distancing to prevent the spread of coronavirus.
The feedback prompted the agriculture ministry on Wednesday to set up control rooms for regular monitoring of various exemptions and relaxations to farmers, wherever possible, to ensure uninterrupted farming operations even during the lockdown.
Agriculture minister Narendra Singh Tomar called for strict compliance of the exemptions granted to agriculture and allied sectors. He stressed on smooth intra-state and inter-state movement of farm produce. He also urged states to relax agricultural produce market committee (APMC) norms so that farmers can sell their produce outside the designated mandis.
Tomar also asked the states to keep extra fund for helping farmers in procuring their produce on minimum support price (MSP).
Though the home ministry has exempted various farm and agri market related operations to allow ongoing harvest and transport of agri products, the implementation of such exemptions has not been uniform across the country.
“On the ground, we are finding that the government is facilitating some processes for the agri-industry players and the same kind of effort is not seen when it comes to farmers and their transportation needs. This is unfair to farmers and will also affect food supply chains,” said Kavitha Kuruganti of the Alliance for Sustainable & Holistic Agriculture (ASHA) which has been closely working with farmers in many states across the country.
The TOI spoke to many farmers and found that though the exemptions helped them in the past one week, they still have problem in getting farm support hands to help them in farming operations.
“We have been told that passes for movement cannot be allowed to everyone at the same time. We fully understand the predicament of authorities while granting exemptions/passes. After all, it’s for our safety. But, we also need our produce to be sent to agri markets and our standing crops to be harvested on time for our survival,” said M Sesha Giri, who cultivated fruits and pulses in his 15-acre farms in Amaravati district of Andhra Pradesh.
He said hundreds of migrant farm workers were stranded in various camps in the state. “We cannot continue with our farming operations without them,” said Giri.
“Situation has eased out a bit. But, farmers are having hard time in getting harvest combines back to Punjab and Haryana from Madhya Pradesh. I have kept my fingers crossed. The government has assured no hassles to farmers in wheat harvesting while procurement to start from April 15 in Punjab and from April 20 in Haryana,” said farm expert, Ramandeep Singh Mann, who keeps a close eye on agricultural activities across north, north-west and central India.
He said, “Vegetable farmers in Uttar Pradesh are facing hard time as they face difficulties in transporting their produce to local mandis. If they get transport, then they have to pay more for it. Even number of buyers has fell down dramatically during the lockdown period.”
In the backdrop of these difficulties, Tomar during his review meeting while citing various exemptions for farming operations stressed that all efforts should be made so that the farmers can sell their produce near their farmlands, besides ensuring that the farm produce is transported without hindrance within the state and inter-state.
In order to avoid gathering during farming and procurement operations, the minister suggested states to use WhatsApp or text messages through mobile SMS to inform farmers in advance about the timing of their movement in a staggered manner. He also suggested farmers to explore option of home delivery of their produce with the help of farmer producer organisations (FPOs) wherever possible.