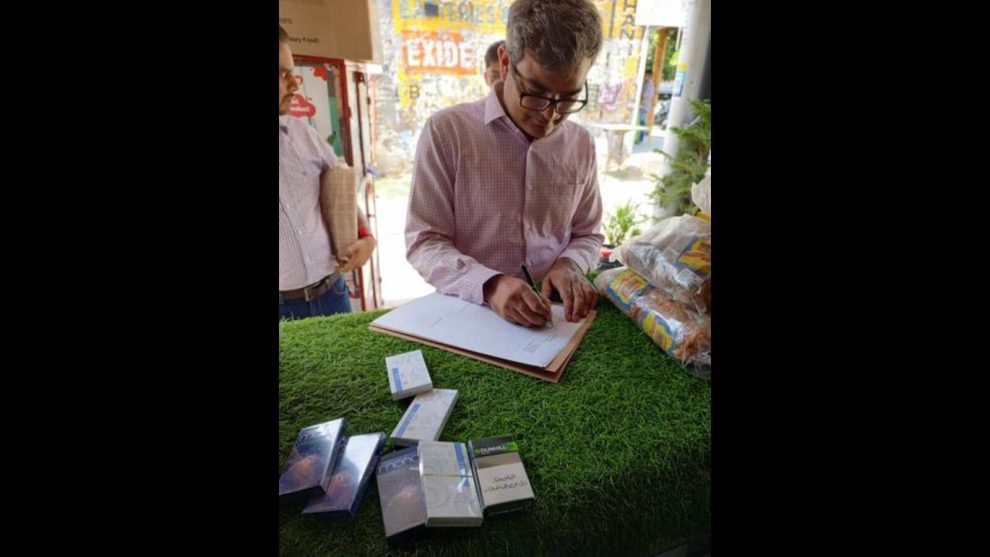 Chandigarh News : Inspectors Navneet Kumar and Lalit Mohan checked the establishments in sectors 31 and 32 of Chandigarh Legal metrology department inspector issuing a notice to a cigarette seller in Chandigarh on Wednesday.

Inspection was conducted at 15 shops on Wednesday to check sale of imported cigarette brands in violation of Legal Metrology Packaged Commodities Rules. Inspectors Navneet Kumar and Lalit Mohan checked the establishments in sectors 31 and 32. An official said imported brand cigarettes were found in two shops in Sector 32 and notices were issued.

One caught with 12-gram heroin

Chandigarh District crime cell of Chandigarh Police arrested one Chand alias Potu, 23, of Dadumajra colony with 12 grams of heroin. He was caught during a checking near Sector-38 West. A case under the NDPS Act has been registered.

Chandigarh A Ropar man, Kuldeep Singh, 52, was arrested for pickpocketing in GMSH, Sector 16. He was stole the purse of Sunil, 42, a resident of Sector 56, while he was standing in a queue. Kuldeep was caught and handed over to the police. A case under Section 379 of the IPC was registered.

Chandigarh Two Activa-borne persons snatched the mobile phone of Chhote Lal Sharma, a resident of EWS Colony in Dhanas, when he was cycling back home. A case under Section 379-A of the IPC was registered.

Mohali Delhi deputy CM Manish Sisodia and Punjab family welfare minister Chetan Singh Jauramajra on Wednesday made a surprise visit to the Aam Aadmi Clinic in Mohali’s Phase 5 and took stock of the health facilities. Sisodia congratulated the Punjab government for starting 75 such clinics. He said health and education are being given the highest priority.

Chandigarh A plantation drive was organised near the department of biochemistry at PU’s south campus in Sector 25. Chairperson Navneet Agnihotri , senator Rajat Sandhir, besides faculty, non-teaching staff and students participated in the drive.