Chennai man manoeuvres his bike parked beside a deep pit. Then this happens - Govt.in - Telling the truth- always! 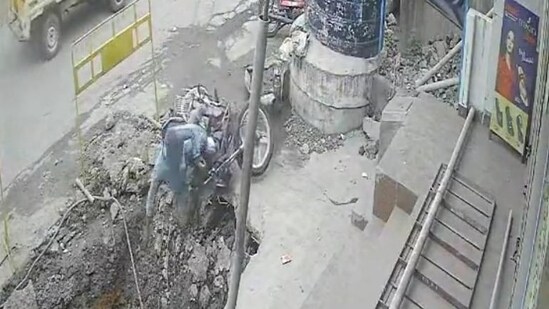 A man recently fell into a giant and apparently deep pothole on Chennai’s Adambakkam road while manoeuvring his two-wheeler parked nearby and suffered injuries in his head and thigh. A video of the incident is now doing the rounds on the internet.

According to reports, the 33-year-old man was trying to relocate his bike when he slipped into the open pit dug for a stormwater drainage system and a rod penetrated into his thigh.

The video shows Vasudevan, a software engineer mounted on his motorcycle, which was parked next to his house overlooking a busy road. He then goes on to move his bike without noticing the deep pit right behind him. This is when the biker accidentally steered his bike right into the hole and was seen falling into it.

Soon after, locals and commuters rushed forward to rescue Vasudevan from the hole.

The man reportedly suffered injuries to his head, shoulder and thigh by one of the iron rods placed within the hole for cement reinforcement. He was rushed to the hospital where he was undergoing treatment, according to an article by India Today.

A 15-foot deep pit was dug outside his house as a part of the new stormwater drainage system work which is underway across the city, the reports said.

The pit was dug by the Chennai corporation as part of the stormwater drain development as part of its efforts to ensure another flood does not take place in the city.