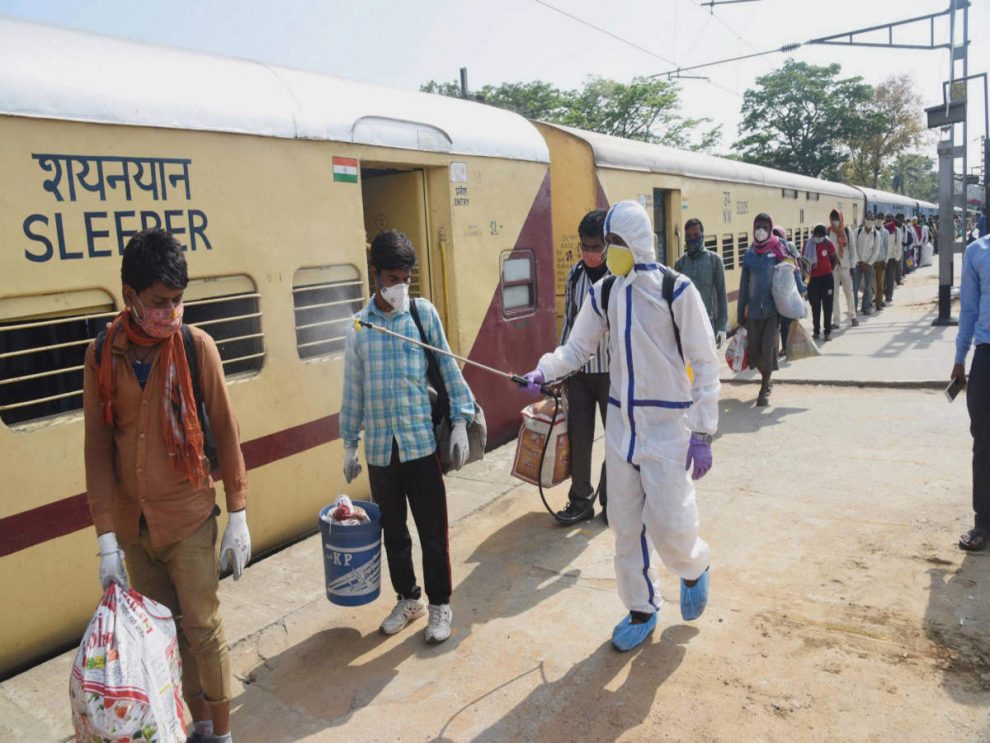 NEW DELHI: The government clashed with Congress and other opposition parties over allegations that migrant workers were being asked to pay fares to travel to their hometowns with the railways saying neither the department nor the Centre was collecting ticket money from passengers on the ‘Shramik Specials’.
Congress chief Sonia Gandhi on Monday morning criticised the government for “charging” migrants fare and said the main opposition party would pay the ticket amounts, hailing the workers as “nation builders”. Soon, Congress functionaries directed state units and governments where the party is in office to coordinate efforts to raise funds.
More on Covid-19
Sensing the political damage of the allegation that poor migrants keen to go home were being charged fares, the railways as well as BJP countered Congress and other opposition parties and said the Centre was bearing 85% of the transportation cost while states sending back the workers were bearing the rest. BJP members said it was only states like Maharashtra, where Congress is a partner, which were refusing to pay the 15%.
The railways said it was charging basic sleeper fare plus Rs 50 for costs that included sanitation and running trains with reduced passengers even as Congress members said that earlier, Indians abroad were airlifted back home at government cost.
According to an internal assessment carried out by railways, the state-run transporter had received only Rs 3.5 crore from sale of tickets for 34 trains that were run till Sunday while the total cost was around Rs 24 crore.
Sonia accused the Centre of ignoring the plight of migrant workers despite repeated reminders from the party. Weighing in, Rahul Gandhi tweeted, “Please solve this puzzle: on one hand, railways is charging ticket fares from labourers trapped in other states, while on the other hand, the railway ministry is giving Rs 151 crore to the PM-Cares fund.”
Speaking at the regular briefing on the pandemic situation, health ministry joint secretary Luv Agrawal said, “The train operation has been allowed to transport limited number of stranded workers for a very particular reason and this process has been started with state governments.”
Railway ministry officials said 85% subsidy or the railways’ share was arrived at by calculating the number of empty berths to maintain social distancing, running empty coaches back from destination stations “under lock and key” and meals and drinking water. They said trains were likely to run even after the lockdown ended if migrants continued to seek passage home.
Sources said the ticket for passengers who boarded a special train from Ajmer (Rajasthan) to Dankuni (West Bengal) was paid by the Dargah committee. “We received the payment from state authorities. We don’t get into how and from where the state got the amount,” said an official.
Official statements, however, failed to dampen the political fight over the issue with BJP alleging that one of the few states not to bear costs for migrants leaving its soil was Maharashtra where Congress and its allies are in office. Bihar CM Nitish Kumar said charges were being paid to the railways by the state government. Madhya Pradesh CM Shivraj Singh Chouhan also said the fare was being borne by the state. Sharing the MP government order, BJP spokesperson Sambit Patra said, “This is how Congress-ruled state governments can pay the 15% for the migrant workers… rather than politicising the issue.”
But not everyone bought the BJP’s arguments. Parties like RJD, Trinamool Congress, CPI and CPM slammed the Centre and questioned why the PM-Cares Fund was not being utilised to ferry the workers home.
RJD’s Tejaswi Yadav said his party would pay the fare for 50 train loads of stranded migrants returning to Bihar. This, he said, was in addition to his offer of 2,000 buses made to the Nitish government earlier.
While CPI said the government should make “meaningful use” of the PM-Cares Fund and pay the railways for taking migrant labourers home, CPM chief Sitaram Yechury said the government was “callous, cruel and criminal” for not extending assistance to migrants when they needed it most. “As the name shows, the new fund is exclusively for those whom Modi cares for. The poor and the vulnerable, the value creators, he clearly doesn’t care for,” he said. CPM also referred to a rail ministry order of May 2 which said governments must collect money from migrants and pay the railways.
Senior TMC functionary and former railway minister Dinesh Trivedi said, “It is inhuman to charge fare from poor migrant labourers who have been waiting to reach home and have no money. Why can’t the PM-Cares Fund be used to rescue them from their plight?”
Derek O’Brien added, “This is a classic example of uncooperative federalism. GOI has a simple theory; when things are good, Centre takes credit, when things get tough, pass the burden on to states.”
Earlier, in an emotional video message, Sonia said, “When our government can recognise its responsibility by arranging free air travel for our citizens stranded abroad, when the government can spend nearly Rs 100 crore on transport and food etc for just one public programme in Gujarat (Trump visit), when the rail ministry has the largesse to donate Rs 151 crore to the PM’s corona fund, then why can’t these essential members of our nation’s fabric be given a fraction of the same courtesy?”
She said it was expected that “our nation builders” will have the first right on the crores of donation amounts to be used to provide free train travel.

SC upholds quashing of appointment of 1,983 instructors in Haryana in 2010

Summer Internship At IIM Indore With 12% Hike In Stipend

Over 900 Deaths Due To Accidents Caused By Cattle In Haryana In 5 Years: Report