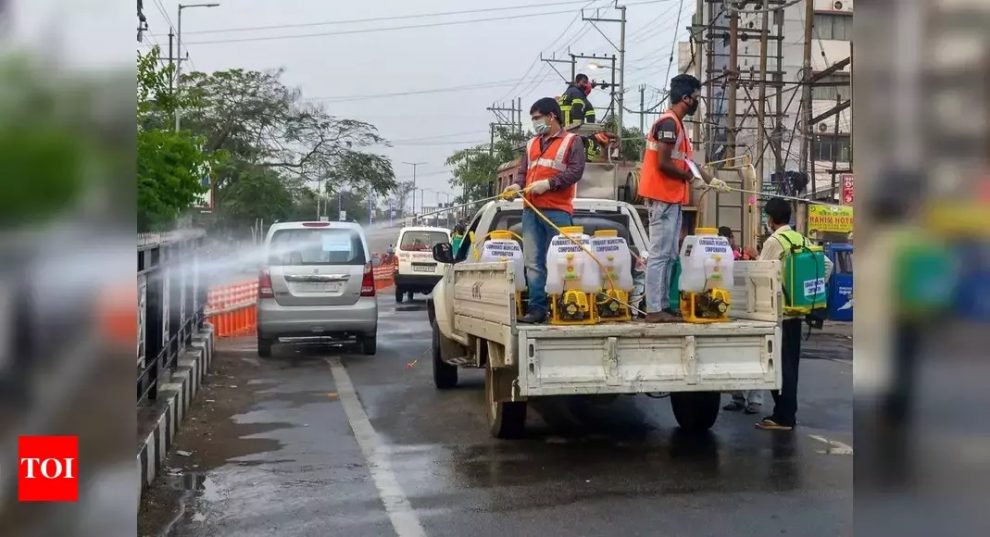 NEW DELHI: The Covid-19 contagion was confirmed in northeast India with Manipur and Mizoram registering one case each, even as 19 states and Union territories on Wednesday reported 86 fresh infections — the second highest for a single day after 99 on Monday.
Two more deaths, one of an 85-year-old woman in Ahmedabad and another in Tamil Nadu, took the national toll from the virus to 13. Health ministry clarified that the death it had reported in Delhi on Tuesday was not a Covid-19 case.
Meanwhile, the total coronavirus cases in the country stood at 645, as reported by the states. Between 60 to 100 daily cases have been reported in the past five days. A total of 56 patients have recovered. The health ministry has confirmed 606 cases and 10 deaths so far.
The fresh death in Gujarat came four days after a 67-year-old businessman from Surat, who had no travel history outside India, has succumbed to the infection.
State health & family welfare department officials said the Wednesday’s victim was from Danilimda area and had travelled to Mecca in Saudi Arabia. “She was admitted to the Civil Hospital in Ahmedabad with respiratory illness on March 22. She had developed bilateral pneumonia,” said an official.
With 15 new cases, Maharashtra again overtook Kerala as the worst coronavirus-hit state. State authorities have confirmed 122 cases so far while Kerala has reported 118 (nine new). Karanataka (51), Telangana (41), UP, Gujarat and Rajasthan (38 each) are next in the list.
Delhi, which did not report a single case of Covid-19 in the last two days, confirmed five new cases on Wednesday, taking the state’s total to 35.
Of the new cases, three are linked to the Saudi-returned woman who was found positive on March 17, and two others are residents of Sainik Farms in South Delhi with travel history to Brazil and London, officials said.
“The Delhi patient who died on Tuesday tested negative for Covid-19 and therefore he was excluded from the list of Covid-19 deaths. Only one death has taken place in the capital due to Covid-19,” said a health ministry official.
Meanwhile, Mizoram reporting its first Covid-19 case, that of a 50-year-old pastor who had returned from the Netherlands on March 16.
“The man belongs to the Mizoram Baptist Church. His wife and two children have also been shifted to the isolation ward at Zoram Medical College (ZMC) in Falkawn, about 20 km south of the capital. The pastor’s samples have been tested at the Gauhati Medical College laboratory,” Lalthangliana added.
Manipur had reported a suspected case on Tuesday, which has since been confirmed as a coronavirus infection.
In Kerala, which has reported 118 cases of Covid-19, health officials confirmed that as many as 12 people who tested positive for Covid-19 in the state have been cured. Among the total number of people who tested positive for Covid-19, as many as 91 people arrived from different foreign countries while eight are foreigners. Nineteen people who tested positive had come into direct contact with the other patients. Haryana has reported two new cases, a doctor working for a private hospital in Faridabad and a nurse working in Gurgaon-based super-specialty hospital, taking the state’s total to 18.
Karnataka reported 10 new Covid-19 cases on Wednesday — the highest in a day. Local authorities said a person suspected to be suffering from the disease has died in Bengaluru. His confirmation test is awaited. The Covid-19 cases in Punjab and Rajasthan stands at 31 and 36 respectively.
The health ministry, however, insisted that there was no community transmission of Covid-19 happening in India as yet. The government has started flu clinics in hospitals such as the Lady Hardinge Medical College (LHMC), where random screening of persons with similar symptoms and no known contact with an infected individual or travel history will begin, officials said.

The Two Day Show Unfolds- P. Chidambaram Behind The Bars