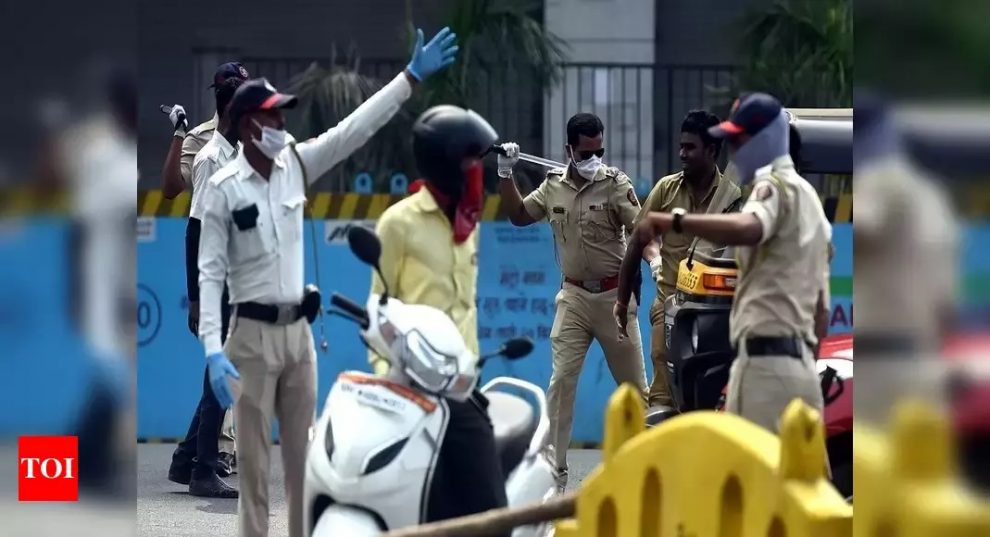 An inquiry was ordered into the death of a 49-year-old ambulance driver on Friday after he was allegedly hit by police in Pune on suspicion that he was ferrying passengers illegally in his vehicle during the lockdown.
Pimpri Chinchwad’s additional commissioner of police Ramnath Pokale confirmed that an investigation has been initiated. The case came to light when the son of the ambulance driver, who was accompanying him when the incident occurred, said they were stopped at a toll naka and the policemen assaulted his father. He claimed they were allowed to proceed only after making a payment of Rs 3,000 to cops. The video of the crying man has now gone viral.
But it’s hardly the only video of its kind. Social media is flooded with footage of police highhandedness, attracting shock from across the country, as they punish people for coming out of their homes in the lockdown. The Pimpri Chinchwad incident comes days after another viral video showed three Punjab cops raining blows with lathi on the soles of a young boy’s feet as he cries in pain and for mercy.
And in Badaun, migrant labourers on their way back home were made to crawl and do frog jumps on the road by policemen in UP.
While the lockdown exempts essential services, there have been cases of police assaulting journalists, delivery boys or those venturing out to buy essential items.
Two cops in Indore were suspended on Friday after they hit a TOI reporter who wanted to purchase milk during curfew break. According to the complaint filed with the police, health correspondent Antriksh Kar Singh was accosted by ASI KC Parashar and constable Atul Sharma, who were in a private SUV.
Singh showed them his media ID card and pointed out that the Indore administration had exempted journalists from curfew restrictions but despite that he was beaten up by them. Elsewhere, those trying to buy groceries have had to brave lathis. A 35-year-old out to buy milk for his three children in Kolkata died of a cardiac arrest soon after an alleged thrashing by cops on Wednesday.
Lal Swami’s wife, Annu, alleged that police beat him in the market and he collapsed when he reached home. Police have denied any assault. The man’s postmortem report said he died of chronic diarrhoea and cardiac arrest. A probe, however, has been ordered by Howrah police commissioner Kunal Agarwal.
ADG (Meerut) Prashant Kumar said that “disciplining disobedient crowds is the biggest challenge in containing spread of Covid-19”. Sudhanshu Sarangi, police commissioner (Bhubaneshwar and Cuttack), maintained that force was being used to ensure lockdown “if people don’t follow directions” and “don’t discipline themselves”. If not brute force, cops are humiliating people by making them rub their noses on the ground or do sit-ups. In one photo shared on Twitter, cops are seen deflating tyres of a vegetable seller’s vehicle to keep him of the street. Patna SSP Upendra Kumar Sharma admitted they have received a large number of complaints against police.
Two sanitation workers were beaten up in the city this week while three constables were dismissed from service for allegedly shooting and injuring a mini-truck driver. Policemen admit there is lack of clarity and confusion on what constitutes “essential” and “non-essential”. For instance, a man in Ranchi was battered on Wednesday when he went out to give food to dogs.
Similarly, in Mumbai, an event manager was hit by police lathi while taking his sick dog to a clinic. The cop who whacked him remarked, “Here people are dying of corona and you are worried about your pet dog.” IG (Ranchi) and police spokesperson Saket Kumar Singh said arguments and scuffle were a result of confusion regarding what is essential. “Cops have faced such a situation for the first time so there is lack of clarity,” he said. “Public can now send videos to certain WhatsApp numbers if they are harassed by police.”
Karnataka has another solution — make those loitering on streets sit in police station all day. Chief ministers of at least two states have intervened, urging cops to cooperate with people. Maharashtra CM Uddhav Thackeray ordered police brass not to use force on those stepping out for essential commodities. In Punjab, CM Amarinder Singh posted on Facebook that “excesses would not be tolerated”. He said it was “overshadowing the good work being done by most”.
(Inputs by Ashok Pradhan, Jaideep Deogharia, Rupak Banerjee, Debashish Karmakar, Ahmed Ali)

At 124, biggest 1-day surge in new cases; 39 in Kerala alone
Govt classifies hydroxychloroquine as Schedule-H1 drug, sale only on prescription