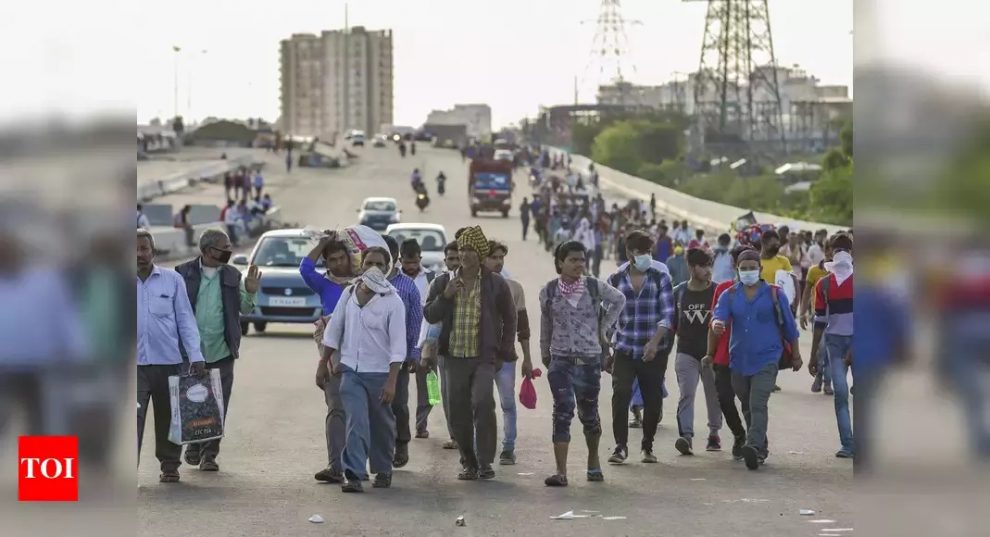 NEW DELHI: Thousands of migrant workers and daily wage workers crossed over to Uttar Pradesh on Friday and many others waited to do so, desperate to return to their distant villages even if it meant walking the entire way home.
Carrying their children, bags and any other belongings they could manage to bundle up, they walked in a steady flow of thousands from the National Capital Region (NCR) to their homes in Uttar Pradesh and beyond.
At the Ghazipur border, they huddled close together, only some with masks — aware of the coronavirus threat that had led to an unprecedented 21-day lockdown of the country and taken away their jobs, but helpless to do anything about combating the infection.
“About 10,000 migrant workers from Delhi and Gurgaon crossed over today,” said a police official at the Delhi-Uttar Pradesh border in Ghazipur where many waited to enter the state.
Most were men but there were also some women and children who had left their homes for a better livelihood working as construction labourers, factory workers, vegetable vendors, rickshaw pullers and a myriad other jobs.
Dhanraj, 35, began his 570-km journey home to Fatehpur in Uttar Pradesh from Najafgarh in west Delhi on Friday afternoon. He earned Rs 300-400 a day fitting iron rods at construction sites but the little savings he had are gone.
“I have no money and my landlord asked me to pay the rent. He said if I could not pay the rent, then I should vacate the room. My contractor also said he has no money to give me, so it is best to go back home. And I have no option but to walk all the way,” Dhanraj told PTI.
Waiting for him at home are his father, wife and two sons. He has found travelling companions in another group of workers like him headed to Fatehpur.
Police stopped him at Uttam Nagar but he continued his journey as soon as they left.
Fearing the spread of the infection, police officials asked many workers not to make the journey. But many said they had no option and tried to hoodwink the police.
There were buses but some of the workers said they were not allowed to board them as they were reserved for essential services. Inter-state road transport remains suspended.
Many said they would make it, one way or the other, hopefully hitching a ride on a truck for part of the way or depending on the generosity of strangers for food.
Ajay Kumar, 20, who repairs shutters said his dream of earning more bucks in a big city crashed just a fortnight after he came to the city from his village in Bareilly.
“Now, I don’t even have money. The only resort is to walk back to my village as others are doing,” he said, determined to get to his home 300 kilometres away.
There were many others like him.
Shiv Kumar, 25, worked at a sweet shop in Sultanpuri in northwest Delhi and earned Rs 500 a day. But with the lockdown, he said he has been left with no option but to go back to his hometown in Ayodhya, some 700 kilometres from Delhi.
“At least, I will be with my family. I will come back when situation settles down here,” he added.
Asked how would he managed to cover the distance on foot, he replied, “There is hardly any option. Once we enter Uttar Pradesh, we will try to find a mode of transport,” Kumar said.
Similar was the case with Mohammad Riaz, 19, a carpenter.
Riaz, who has been working in Delhi for the last three years, said he earned Rs 600 for working six hours a day and Rs 900 for nine hours.
“But with no earnings for the next few days, my savings will dry up. So it is best to go back home. Since there is no transport, there is no alternative but to walk,” Riaz, a native of Moradabad in Uttar Pradesh, said.
The stories found echo in the satellite town of Gurgaon where a group of about 20 men began the march to Madhya Pradesh.
Walking the silent roads, they said they would prefer to go home to their families rather than stay here and starve.
Friday is day three of the countrywide 21-lockdown to curtail the spread of the disease.
Prime Minister Narendra Modi said people should stay where they were, it was clearly not an option migrant workers, with no jobs, no money and no savings, were willing to exercise.

‘When I came to run for Sachin, Afridi was abusing him a lot’: Sehwag’s big revelation about India-Pakistan 2003 WC game