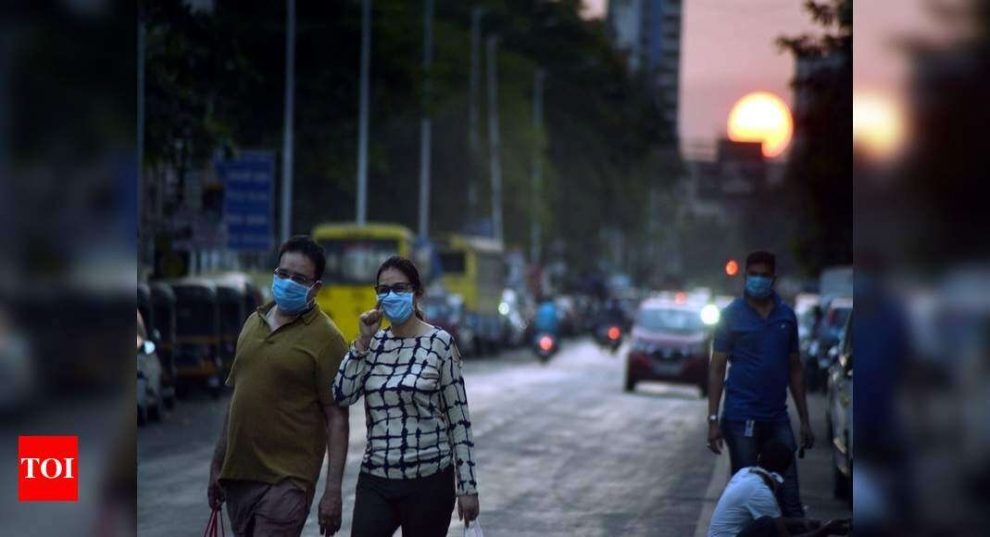 NEW DELHI: India’s Covid-19 count crossed the 1,000 mark on Sunday, with states reporting 130 new cases, the highest for a single day so far, even as Delhi saw a major spike of 23 new infections and Maharashtra reported two deaths from the disease.
This is the first time Delhi’s single-day Covid-19 tally has crossed into double digits. It’s a worrying sign indeed, the state authorities said.
Nationally, Sunday was the third consecutive day when the count of new cases was over 100, indicating that the infection was spreading. States have reported 1,122 coronavirus cases so far, of which 30 have died. The Union health ministry has confirmed 1024 cases and 27 deaths.
Maharashtra, which now has the highest number of 203 Covid-19 cases, reported two fresh deaths on Sunday, taking the toll in the state to eight.
The wife of a taxi driver from the western suburbs of Mumbai and a man from Buldhana in Amravati division, both in their 40s and without any international travel history, succumbed to the disease.
Local authorities said Maharashtra’s count of positive cases has touched 203 in a very short span. “It took 16 days from the first reported case to reach 100 for the state. But the second hundred cases have come in a quick span of five days,” officials said. Dr Anup Kumar, commissioner, National Health Mission said that 35 people have recovered from the infection and have taken discharged from hospitals across the state.
Across India, data shows, 119 Covid-19 patients, approximately 10% of the total number of cases reported so far, have recovered from the disease.
After Maharashtra, Kerala is worst affected by the Covid-19 crisis with 202 cases and one death, as per state data. Gujarat has reported total 58 Covid-19 cases and five deaths, including a 47-year-old man who succumbed to the disease on Sunday.
An analysis of the five deaths in Gujarat reveal that three were senior citizens above 65 years of age and two were below 50 years of age.
In UP, the Covid-19 cases are rising fast too. The state recorded its highest single-day tally on Sunday of 19 new patients, taking its total tally to 80. State authorities said all new cases were linked to two ‘Covid’ clusters, Noida and Meerut, but there was no sign of community spread so far.
Of the 19 new cases, 12 were reported from Meerut, four from Noida, two from Ghaziabad and one from Bareilly. All 12 cases in Meerut today were contacts of the Bulandshahr man who had been reported positive on Friday.
Similarly, the six cases of Noida and Ghaziabad and one from Bareilly who tested positive on Sunday had links with a fire-extinguisher factory in Noida, officials said. The Bareilly youth who tested positive on Sunday worked in this factory and returned home on March 20.
Principal secretary, health and family welfare, Amit Mohan Prasad said the Noida factory had been declared a cluster. “The factory has been the source of infection to some 20 persons,” he stated. Gautam Budh Nagar district administration has filed an FIR against the company for allegedly hiding information regarding coronavirus infections. “A British national had visited the firm for audit and the information was not shared with the health department,” officials said. They added Meerut has also been declared as a Covid-19 cluster.
As many as eight new patients tested positive for Covid-19 on Sunday are contacts of a 50-year-old man, with no foreign travel history, who came to Meerut from Amravati in two trains, stayed in three localities, attended a wedding and prayed at two city mosques before testing positive here, local authorities said.
A 24-year-old man from Dhanbad in Jharkhand suspected to be suffering from Covid-19 died on Sunday. If confirmed, the man could be Jharkhand’s first Covid-19 case, as well as the first death. He had travelled to Kerala recently.
J&K reported its second death on Sunday with a 62-year-old Covid-19 positive patient succumbing to his illness. He was vegetable seller in his native village in Tangmarg near Gulmarg in Noth Kashmir and had no travel history.
In Kerala, which has reported 20 new cases taking the state’s tally to 202 cases, a nurse with Kottayam Medical College Hospital had tested positive was confirmed positive for Covid-19 on Sunday. Four more persons, in their 20s, have tested positive for Covid-19 in Bihar taking the state tally to 15

Is work from home stressful? Companies rope in psychiatrists, experts for counselling