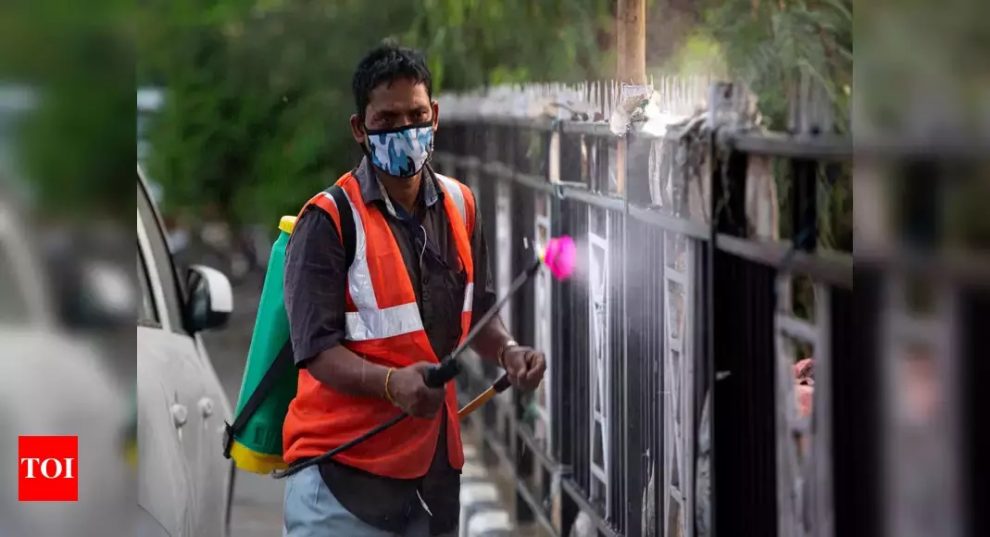 NEW DELHI: Indian authorities are hopeful that the 21-lockdown measure will halt the spread of coronavirus contagion saving the country from a drastic community transmission. The unprecedented impact of the outbreak has overwhelmed authorities around the globe with India and the world continuing efforts to contain the pandemic.
Here are the latest developments from around the world:
At least 60 daily cases in past five days

G20 leaders to hold video conference
Leaders of the Group of 20 nations will hold a summit today via video conference to discuss measures to protect the global economy, amid coronavirus pandemic which has claimed over 18,000 lives globally. The summit, which will be chaired by Saudi Arabia’s King Salman bin Abdulaziz Al Saud, aims to “advance a coordinated global response to the COVID-19 pandemic and its human and economic implications,” according to the statement published by the G20 Secretariat on Tuesday. India is a member nation of the G20 group. Speaking on the summit on Wednesday, Prime Minister Narendra Modi said that the Group of 20 (G20) has an important role to play in the fight against coronavirus.
Jobless daily wage labourers walk back home to villages
With Covid-19 lockdown robbing daily wagers and labourers of their income, thousands across India are walking long distances, over 100 kilometres in many cases, and often on empty stomachs to reach their native villages and towns. In Agra, closure of tourism and footwear industry which employs scores of daily wagers has left many in dire straits. With no money and no work, those working in bordering states are desperate to make it home. Mohammad Kasim and five others managed to reach Aligarh from Palwal (Haryana) after 28 hours of being on the road, walking and hitchhiking on trucks.
Online delivery cos look to resume operations with ‘curfew passes’
Over the course of Wednesday, police authorities in Delhi, Gurugram, Pune, and Bengaluru issued notifications and called for meetings with e-commerce executives to resolve issues faces by delivery executives amidst the 21 day lockdown. Some cities are expected to issue “curfew passes”, which executives in these companies said may take a few days, indicating that delays are likely to continue this week before services normalise. However, it might take a couple of days for services to normalise.
Chinese mainland reports zero increase in cases
The Chinese health authority on Thursday said that no new domestically transmitted cases of the novel coronavirus disease (COVID-19) were reported on the Chinese mainland on Wednesday. The National Health Commission received reports of 67 new confirmed COVID-19 cases on the Chinese mainland on Wednesday, all of which were imported. By the end of Wednesday, 541 imported cases had been reported.
Coronavirus could become seasonal: top US scientist
Anthony Fauci, who leads research into infectious diseases at the National Institutes of Health said at a briefing on Wednesday that there is a strong chance the new coronavirus could return in seasonal cycles. Fauci said that the virus was beginning to take root in the southern hemisphere, where winter is on its way with southern Africa and countries in the southern hemisphere reporting cases as they go into their winter season. If these countries have a substantial outbreak “it will be inevitable that we need to be prepared that we’ll get a cycle around the second time,” said Fauci.
Indian-American hoteliers offer free accommodation to stranded Indian students
With the students scrambling for a roof over their heads after being asked to vacate their hostels and India banning international flights for a week from March 22 due to the coronavirus pandemic, more than 6,000 rooms in nearly 700 hotels were offered to Indian students by Wednesday following a call from the Indian Embassy. The Indian Embassy have been running a round-the-clock helpline since last week for the students in the US, who number over 2,50,000.
Lockdowns preventing contagion from reaching conflict zones
An international aid group says closures aimed at containing the coronavirus pandemic are preventing it from reaching 300,000 people in conflict zones across the Middle East, as the virus arrived in war-torn Libya and case counts rose in Syria and the Gaza Strip, among the world’s most vulnerable places. The Norwegian Refugee Council said it was unable to reach people in Syria, Yemen and the Gaza Strip, where authorities have imposed strict measures to halt the spread of the virus.
Two vaccines enter human trials; total 35 firms in race
There are currently two vaccines that have entered human trials — one in the US and one in China — and they could be a year to a year-and-a-half away from deployment. Treatments are also being investigated — some new drugs and others that have been repurposed, including the antimalarials chloroquine and hydroxychloroquine. Worldover around 35 pharmaceutical companies and institutes are racing against time to create such a vaccine. At least four such companies, have already started testing in animals. This unprecedented speed to create a vaccine stems from the early Chinese efforts to sequence the genetic material of Sars-CoV-2, the virus that causes Covid-19. The Chinese medical authorities wasted no time in sharing that sequence with research groups as early as January.