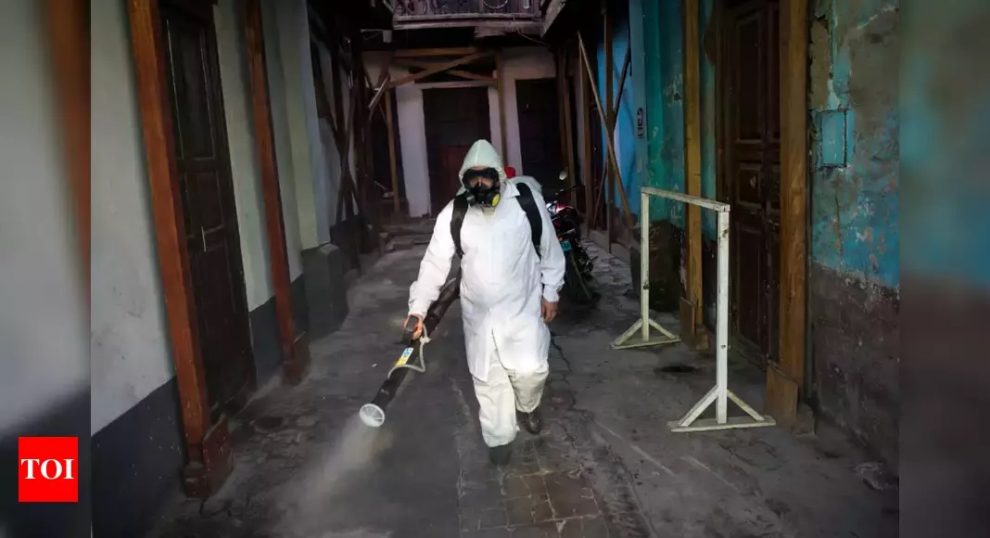 NEW DELHI: Led by a rush of cases in Kerala, the daily count of new Covid-19 infections in India zoomed past 100 for the first time on Friday. As many as 124 fresh cases were reported from states, 39 from Kerala alone, taking the total number to 854 so far.
Here is a look at the latest updates on the outbreak of coronavirus from India and around the world —
More than 595,000 people infected across the globe
More than 595,000 people have contracted the virus around the world and about 27,000 have died. While the U.S. now leads the world in reported infections, five countries exceed its roughly 1,700 deaths: Italy, Spain, China, Iran and France. In Europe, Italy recorded its single biggest 24-hour rise in deaths, with 969 more victims, to bring its total number of fatalities to 9,134. The country now has more than 86,000 cases, surpassing China to record the grim distinction of the second-most infections in the world, behind the U.S.
Coronavirus: 15 lakh who flew back to India between Jan 18-Mar 23 under lens
Some 15 lakh people who returned to India between January 18 and March 23, when the complete ban on international arrivals kicked in, are at the centre of an intense scrutiny to ensure they do not become Covid-19 transmitters with the cabinet secretary writing to states and asking them to track individuals who have not been accounted for in the screening-quarantine surveillance process.
Coronavirus outbreak: Complete coverage
Read our coronavirus live blog for all the latest news and updates
Give shelter to stranded migrants, make them stay put: Centre to states
With reports of thousands of migrant labourers on the highways and stranded at various places, the Centre has sent an urgent advisory to states asking them to provide food and shelter to unorganised sector workers to ensure they stay where they are and do not take to the roads during the ongoing 21-day national lockdown.
Focus on migrant workers walking home, Sonia to PM Modi
Congress president Sonia Gandhi wrote to Prime Minister Narendra Modi, urging immediate help for migrant workers walking home, saying the purpose of lockdown should not be defeated by letting the poor bear its cost. She said transport should be made available to take the migrants home and district collectors should be made responsible for those who cannot afford to rent a guest house.
60% of trucks on roads stalled by ‘non-essential’ tag
The domino effect of the three-day-old lockdown continued to tell on the goods supply chain across states on Friday, with government intervention failing to resolve operational complexities like 60% of the 1.2 crore trucks stuck on highways and cities being held up because they are laden with “non-essential” FMCG cargo.
IMF chief: ‘Clear we have entered recession’
The coronavirus pandemic has driven the global economy into a downturn that will require massive funding to help developing nations, IMF chief Kristalina Georgieva said on Friday.
“It is clear that we have entered a recession” that will be worse than in 2009 following the global financial crisis, she said in an online press briefing.
British PM Johnson, health secretary Hancock test positive for coronavirus
British Prime Minister Boris Johnson said on Friday that he has tested positive for coronavirus after experiencing “mild symptoms”, becoming the first world leader to announce the infection. Minutes after Johnson’s announcement, his health secretary Matt Hancock tweeted that he too was infected and was in self-isolation.