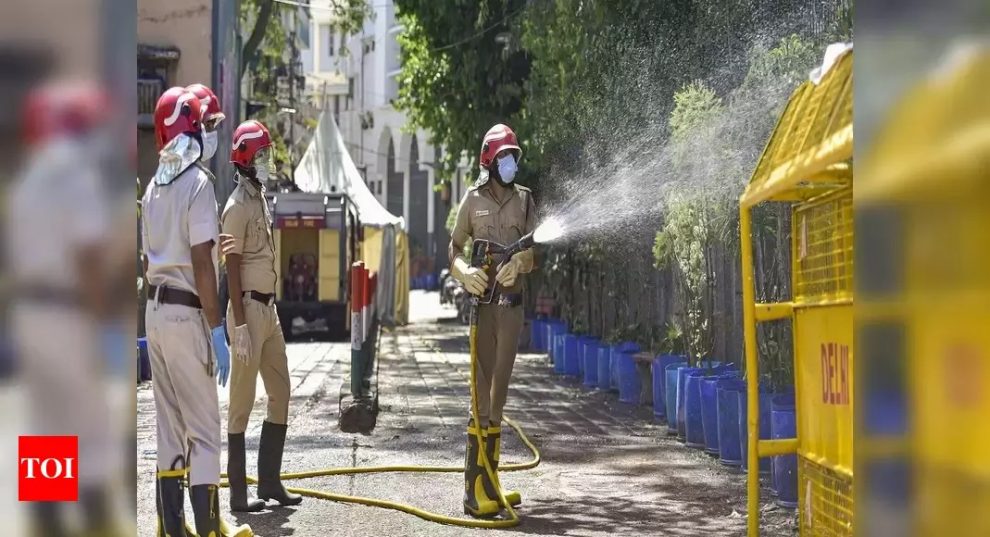 NEW DELHI: In a huge upsurge in Covid-19 cases, Delhi recorded 141 new ones on Thursday, among them a senior resident at AIIMS and his pregnant wife. The Tablighi Jamaat evacuees accounted for 129 of the fresh cases. About 50km away, at the Jhajjar campus of AIIMS, another 52 of the Jamaat members tested positive.
A disturbing aspect has been the unruly behaviour of these evacuees at all the hospitals which is posing a serious challenge to the medical staff and has compelled state health secretary Padmini Singla to write to the Delhi police commissioner for adequate deployment.
The state’s total count of Covid-19 cases has now climbed to 293, the third highest in the country after Maharashtra (338) and Tamil Nadu (309), driven mainly by the high positive rate of the Jamaat followers.
Nearly 2,000 members of this religious group had been evacuated from its Nizamuddin headquarters after some of them were found positive for Covid-19 in Telangana. They had attended a religious congregation at Nizamuddin. Around 536 of the evacuees were found to be symptomatic and were shifted to nine hospitals while the rest were sent to isolation units in the state.
Dr Nutan Mundeja, director general of health services in the Delhi government, told TOI that most of these evacuees in hospitals are testing positive for the disease. “Of the samples sent so far, only 20-25 have tested negative. A majority of the samples are positive,” she said. According to Dr Mundeja, this could be because these people were living in close proximity inside the building. “They were sharing the same washrooms and utensils. I don’t think the results are surprising,” she said.
Of Delhi’s count of 293 cases, 182 are that of these evacuees. Two of them — a 64-year-old man from Tamil Nadu and another man in his 70s from the Nizamuddin area — died of the infection at Lok Nayak Hospital recently, taking the state’s toll to four.
Sources said 150 of the evacuees are also admitted at AIIMS Jhajjar. “We have received test reports of around 60 of them. Of those, 52 are positive,” said a senior official. The doctors monitoring them say most of them are likely to be positive for Covid-19 because they are highly symptomatic.
“We are not discharging those who have tested negative. They will be tested again because chances are they might test positive again,” said a doctor at Lok Nayak Hospital, where 227 of the evacuees are admitted. Another 152 are admitted at Rajiv Gandhi Super Specialty Hospital in the capital.
Senior doctors at these hospitals are complaining that these men were not willing to follow the treatment or isolation protocols. There were chaotic scenes at RGSSH on Tuesday when one of those quarantined attempted to jump to death. “He was saved by the doctors. Also, some of the patients have been abusing nurses and junior doctors and insisting that they be allowed to leave. We don’t know how to control them,” the doctor complained.
State health secretary Singla had to write to the Delhi Police chief on Thursday for the deployment of adequate police force at the hospitals and quarantine centres to control them. “Yesterday, it was reported by RGSSH that one of the inmates… attempted suicide but was rescued by the hospital staff. In another incident, two inmates quarantined in the Narela DDA facility escaped and were later tracked down in Patparganj,” she wrote, pointing out that the evacuees were creating a law & order problem, making the job of the medical staff difficult.
Nurses at AIIMS Jhajjar said the ones admitted there were banging on the doors on Wednesday night demanding they be allowed to leave.
Meanwhile, the AIIMS resident has become the eight doctor in Delhi to test positive. He was working with the physiology department. All the hospital employees who came in touch with the senior resident have been asked to go into self-quarantine.

No, R Madhavan DID NOT lose his house while trying to fund ‘Rocketry: The Nambi Effect’