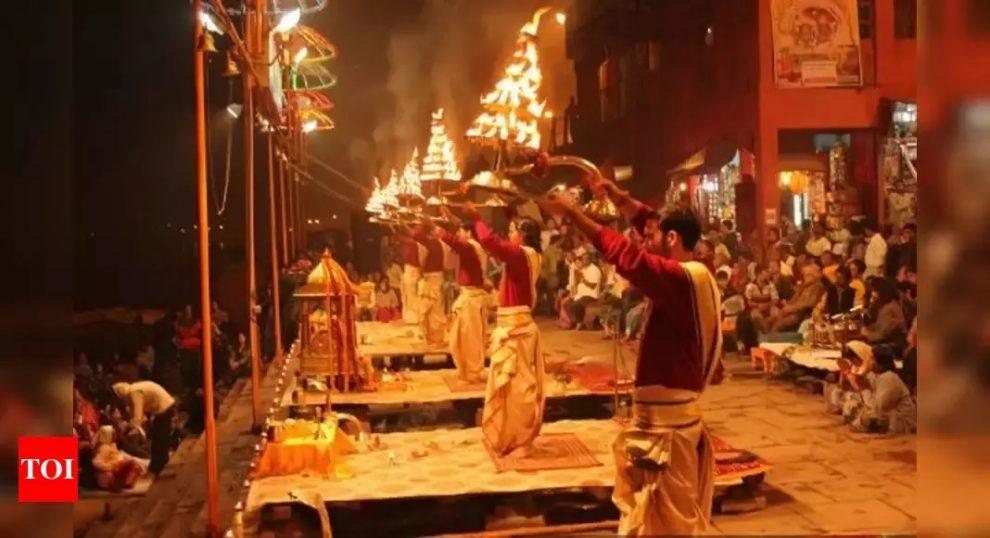 VARANASI/ HARIDWAR: The famous Ganga aarti of Varanasi, which is a prime attraction for domestic and foreign tourists, will now be conducted by just one priest, and without any public participation, with the Varanasi district administration banning gatherings on the ghats during the ritual as a precautionary measure against the coronavirus pandemic.
In Haridwar, the district administration capped the number of devotees at 50 during the ritual at the Har-ki-Pauri area where on a normal day thousands of people witness Ganga aarti.
Varanasi district magistrate Kaushal Raj Sharma said that the traditional aarti will not be stopped, but will be performed in a ‘curtailed form’. “Public participation has been banned and now only aarti organisers will participate in the ritual,” he said. Ganga Seva Nidhi member Dr V K Singh said, “It has been decided to continue the tradition of the daily aarti, but the number of archaks (priests) has been reduced to one.”
Haridwar district magistrate C Ravishankar said the restrictions will be imposed at Har-ko-Pauri from Thursday and will be in effect till March 31. “With the beginning of navaratras on March 25, live streaming of the aarti will commence so that devotees can take part in the ritual virtually,” he told TOI.
Office bearers of Ganga Sabha, a religious organization, who participated in a meeting with the district administration on Wednesday had opposed the idea of restricting the pilgrims and instead proposed that about 1000 masks can be distributed at the aarti every day and the ghat can be sanitised. But the idea was shot down by the district authorities as being “practically not feasible”. Instead, the ban on assembly of people has been put in place.
Earlier, Ganga Sabha general secretary Tanmay Vashishth told TOI that “the aarti at the Har-ki-Pauri is an ancient tradition which cannot be stopped because of the virus threat and nor can Ganga Sabha advise people not to attend the aarti.” “If the administration does not want pilgrims to gather in large numbers, it should ban their entry into the city,” he further said.

No GST On Residential Premises If Rented For Personal Use: Government