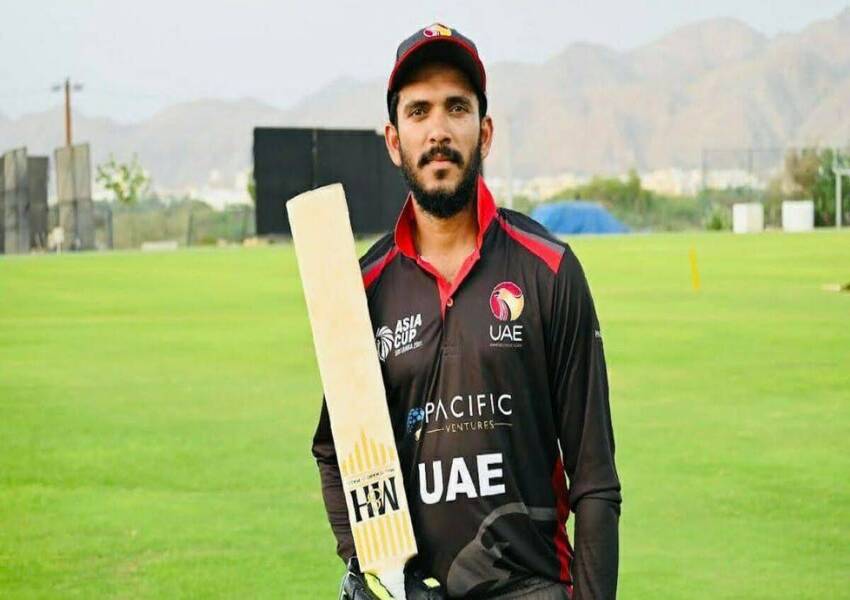 CP Rizwan’s cricket career didn’t really take off and the electrical engineer from Kerala, like many from his state, migrated to the gulf after landing a job in Sharjah. Eight years later, the 34-year-old has made it big – on the field. On Friday the Emirates Cricket Board named Rizwan the skipper for the Asia Cup qualifiers. If Rizwan’s UAE wins the qualifiers, they will be in the same group as heavyweights India and Pakistan.

“It will definitely be special if we qualify and get to play against India. But we just want to focus on one step at a time,” Rizwan told The Indian Express. The United Arab Emirates, Kuwait, Hong Kong and Singapore will be fighting for the one spot available in the group stage.

From not being able to get a game for his state in the Ranji Trophy to leading a national team, Rizwan’s cricketing fortunes have changed for the better.

Rizwan, leg-spinner turned batsman, hails from Thalassery, a cricket hub with a history that dates back to the British raj.
Rizwan made a name for himself in age-group cricket and represented Kerala in the Under-19 Cooch Behar Trophy and was a part of the Under-23 team. Rizwan also toured South Africa with the Kerala team, a squad that included Sanju Samson. But he couldn’t progress further because he took a break from the sport to complete his engineering degree. He tried to make a comeback after completing his studies but could not replicate his age-group success at the senior level. He was named in the Ranji Trophy squad but was on the bench.

Migrating to UAE for a job also gave his cricket career a lease of life. His international career has now reached new heights. On Sunday, Rizwan walked out to lead the side against Kuwait.

Last year, Rizwan scored his first international century (109) in a One-Day International against Ireland when the team was under pressure at 51 for 3. Rizwan and Muhammad Usman added 184 runs for the fourth wicket. The two centurions helped UAE chase down 270 with six wickets in hand and an over to spare.

“I am happy and honoured to lead the UAE national team. We have been doing well in T20 tournaments. Our players play a lot of T20 games here in the domestic circuit also. But having said that, we have to execute the skills in the right way on the given day,” Rizwan said.

In former India all-rounder Robin Singh, UAE have an experienced coach to guide their newly-appointed skipper.

“We have been working really hard under coach Robin Singh. He is a person with a great work ethic and that quality has rubbed on to the players also. We have been training well and hopefully, everything will fall into place,” Rizwan, who has played 29 ODIs and seven T20Is for UAE, said.

The electrical engineer who graduated from the Cochin University of Science and Technology had an opportunity to return home when he got a job with the postal department but he decided against moving.

His performances in the domestic matches in UAE for teams like Yogi Group, Bukhatir XI and Interface, eventually opened the doors to the UAE national team.

After fulfilling the requirement of residing in the UAE for four years, Rizwan made his debut for his adopted country in an ODI against Nepal in January 2019.

“Yes, it could be said that my decision (to stay in the UAE) has been vindicated. I just want to say thanks to all the coaches, friends, family and relatives and the almighty who helped me in this journey,” said Rizwan.

Biju George, the former India women’s fielding coach, has seen Rizwan from his under-23 days for Kerala.

“Rizwan is a fully dedicated player. He is a confident and street-smart player, I think, he can be an asset to the UAE team as their captain,” George said.