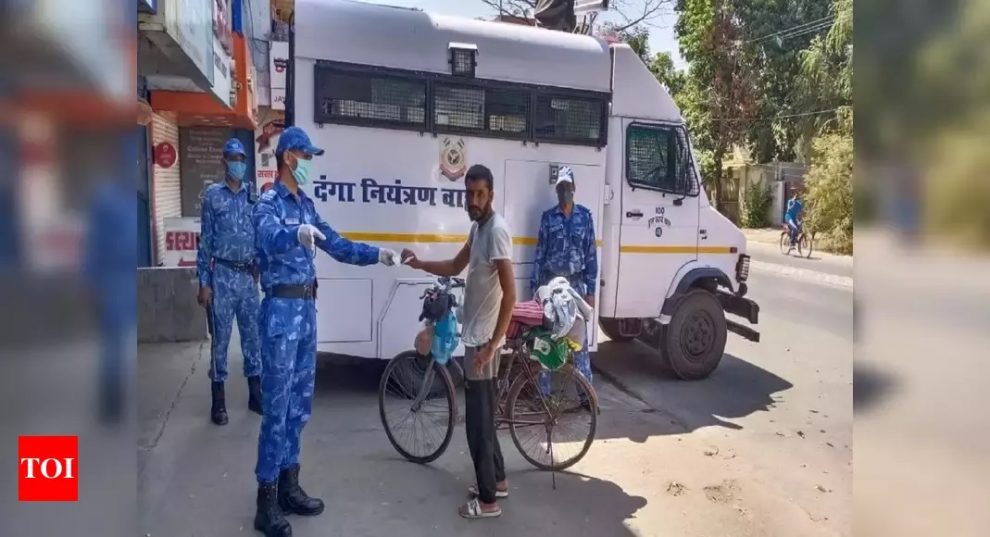 NEW DELHI: Mohammad Arif, a 30-year-old watchman working in Mumbai, could barely control his tears as he halted on Sunday his 2,200 km-bicycle journey in Vadodara en route to a meeting with his ill father, suffering from cerebral hemorrhage and stuck near the LoC in Jammu’s Rajouri because of the 21-day lockdown.
Arif’s 2-minute video about his epic trip shot by some locals on the Kandivali highway in Mumbai as he cycled towards Ahmedabad had gone viral three days ago.
On Sunday, even as he reached Vadodara after two days on the road, a CRPF team stationed near the LoC and moved by his plight pressed their paratroopers to airlift Arif’s father to the Jammu district hospital by a Pawan Hans chopper, a 40-minute ride. They also alerted the Gujarat Police and requested them to try and contact Arif and stop his cycle journey as help was organised for him.
A private goods delivery truck was soon requested by the Vadodara Police to carry Arif till Jodhpur, from where the rest of his journey to meet his father would be facilitated. The CRPF has promised a vehicle will pick him up at Jodhpur and bring him till Delhi and then to Jammu.
It was nothing short of a miracle for him, the good people he met during his trip, the kindness of strangers. “In Mumbai, for instance, a man called Dipesh Tank, a builder by profession, helped pass on my photographs and story to social media. There was Mohsin bhai in Ahmedabad who filled my bag with food enough for a few days. And there was the media and the CRPF,” Arif told TOI. “My wife and three kids were alone in my Rajouri village when my father had a brain stroke on April 2. I had come to Mumbai just 28 days ago. I hope I can see my father alive.”
Zulfiqar Hasan, CRPF special DG (J&K zone), said, “There was a call on our Madadgar helpline from a TV correspondent. Dr Suneem Khan from the 28 Battalion got in touch with the Jammu and Kashmir doctors’ association and a Pawan Hans chopper was quickly arranged this morning (Sunday) at 10.30 am to bring Arif’s father to the Jammu hospital.”
Arif said he only had Rs 1,800 in his pocket when he left Mumbai but a few people along the way offered him food and medicines for the blisters on his feet.
“I hope my journey is able to spread the message of brotherhood,” he said.

SC on migrants: ‘Not experts, can’t impose views on government’