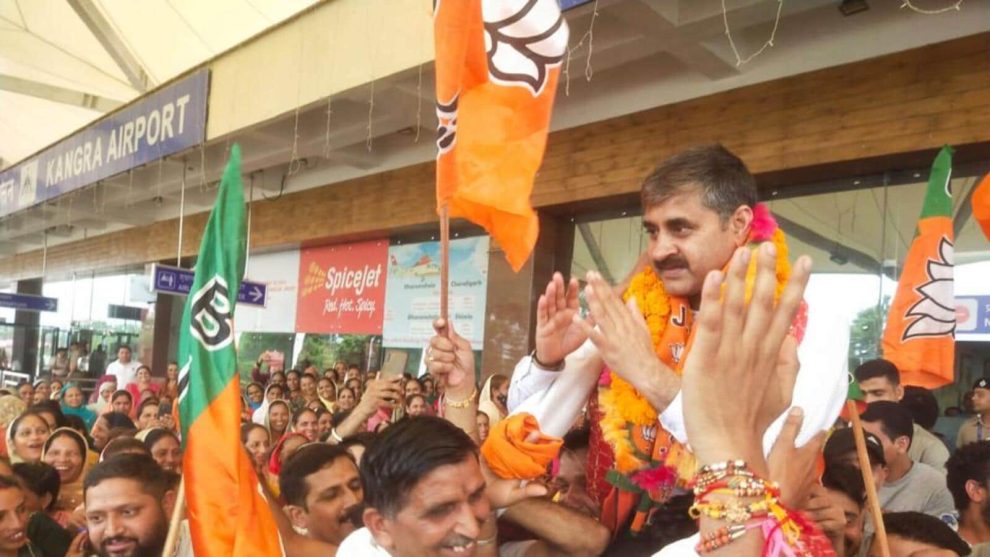 Chandigarh News :  Seeing the crowd that has gathered here, one can easily predict the result of the upcoming assembly elections and with whom people of Himachal are, said Kajal Kangra MLA Pawan Kajal being welcomed at Kangra Airport by his supporters on Thursday.

A day after joining the BJP, Kangra MLA and former Himachal Pradesh Congress working president Pawan Kajal held a show of strength at his home turf as his supporters accorded him a grand welcome.

Kajal had joined the BJP on Wednesday along with Nalagarh MLA Lakhwinder Singh Rana in New Delhi.

His supporters had gathered at Gaggal airport to welcome their leader, a two-term legislator.

On the behalf of the BJP, Dharamshala MLA Vishal Nehria and a large number of saffron party workers were also present.

Talking to the media, Kajal said he had changed the party after his supporters suggested so.

“Today, the country is changing under the leadership of Prime Minister Narendra Modi,” he said.

“It is because of the leadership of PM Modi that India’s respect has been restored in the world. Himachal Pradesh is a small state, but Jagat Prakash Nadda is the national president of the BJP from here. When the change is happening, why don’t we change?” he said.

Seeing the crowd that has gathered here, one can easily predict the result of the upcoming assembly elections and with whom people of Himachal are, said Kajal.

He said some people were calling him a turncoat, but the immense support he has got reflects that the decision to join the BJP was not wrong.

Kajal, who belongs to dominant OBC community, is a two-term legislator from Kangra.

Joining the BJP is a homecoming for Kajal, who won the first assembly election as an Independent in 2012.

He extended support to the Congress government led by Virbhadra Singh and remained Congress’ associate member. He formally joined the Congress in 2017 and was re-elected to the state assembly.

He was appointed the state Congress working president in April this year.

However, Kajal was miffed after the state leadership reportedly started ignoring him after his appointment.