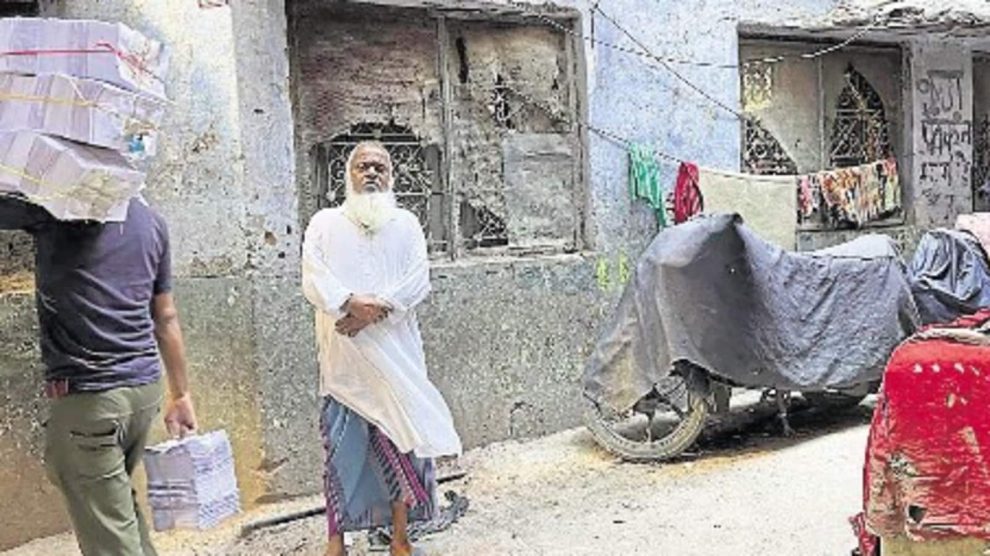 Delhi News : As part of our ‘Walled City dictionary’ series that explores the names of Old Delhi places.

In these ever shifting times, rare are the people who gain years on the very street in which they were born. Retired “nikhar polisher” Muhammed Haneef is standing (see photo) outside the house where his mother gave birth to him 74 years ago. With arms folded, chin raised upwards, he confirms that the house no longer resembles his childhood home, having been altered over the years. He goes on to reveal his family’s inter-street history: “My mother was from Galli Chooriwallan, my father was from Ballimaran, my mamu (uncle) helped them settle here in Kucha Rohilla Khan.”

The long winding lane bores deep into the neighbourhood, and is currently stimulated with a melange of laid-back afternoon sounds: scurrying footsteps, scraps of murmurs drifting out of windows, the meh-meh of pet goats.

And yet it feels quiet, so quiet that you can hear the friction of the matchstick on the matchbox as grocer Nadeem Ahmad lights his Jai Bharat beedi. His shop has the bustle of a community club. People of the kucha stop by to sprinkle seasoning to the local news.

Standing by the counter, Muhammmed Haneef explains that Rohilla Khan of Kucha Rohilla was a Mughal noble. While a passerby pauses to describe a traditional kucha as a locality of people having the same occupation.

Shaking his head, shop owner Nadeem Ahmad, enthroned behind the counter, remarks that their beloved kucha has strayed far from that definition, and in fact is left with very few old houses and very few old families. The landmark bargad tree too is lost to legends. But the Bar Wali Masjid that took its name from the tree continues to exist, though as a more modern structure. Muhammed Haneef interjects to recall the kucha’s lost akhara. “Every evening young men would practice lathbaji (baton fights) there… I was one of those young men.” Soon afterwards, the elderly man gets up to leave, adhering to the routines of his daily life that have turned out to be more enduring than his changing kucha. “I get up every morning at four to make chai… At six, I make chai for my wife, Parveen Begum.”

Meanwhile, the shop owner has summoned a new round of chai from Raju Tea Stall. Close to Grace Hair and Beauty Parlour (“only for ladies”), it serves the kucha’s best chai.
(Except for the headline, this story has not been edited by GOVT.in staff and is published from a syndicated feed.)