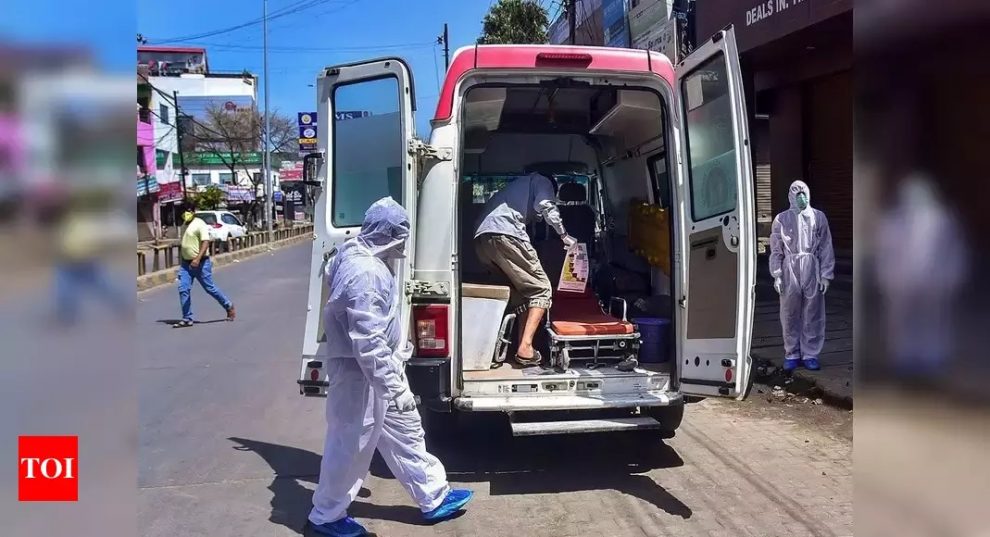 MUMBAI: An 85-year-old surgeon-cum-urologist died of suspected coronavirus early on Friday even as his 50-year-old cardiac surgeon son, who was operating on patients till Wednesday, is said to have contracted the infection.
The news of the death started a scramble to trace contacts across two of the city’s major hospitals where the cardiac surgeon visited to operate and for his father’s treatment in the last few days. One of the hospitals shut down the cardiac catheterisation lab, while another sealed a part of the building for a disinfection drive.
Sources said the octogenarian’s grandson, who had returned from the UK about a fortnight ago after the colleges there shut, has also tested positive.
Maharashtra’s cases went up to 153 on Friday from 130. Though that meant 23 new cases, the state government said 27 fresh cases had been added but kept the total count at 153. The discrepancy could possibly be on account of some of Thursday night’s patients being added to Friday’s list, it is said.
According to the state, 15 of the new cases are contacts of the Islampur-based Sangli patients who had a foreign travel history. The total number of Covid-19-infected people from one family in Islampur went up to 24, with 12 more members testing positive on Friday.
Four of Friday’s positive cases, the state said, are contacts of Thursday’s Nagpur case, there are 2 cases each from Mumbai and Thane and one each from Palghar, Kolhapur, Gondia and Pune.
The 85-year-old city doctor, who developed symptoms a few days ago, is believed to have started experiencing breathing difficulty on Thursday morning following which he was taken for a CT scan to Saifee Hospital, Charni Road.
Changes seen in his lungs during the scan raised a red flag that he was probably suffering from Covid-19. In the meantime, the man and his grandson, who had both taken a home test on Wednesday, came positive. Later in the day, the family shifted him to Mahim’s PD Hinduja Hospital, where he passed away around 12.30am on Friday.
State officials didn’t attribute the death to coronavirus saying confirmatory tests were being carried out at Kasturba Hospital. “The man was a diabetic and had a pacemaker too,” said state epidemiologist Dr Pradeep Awate, who also said two of the family members had recently returned from the UK. At least two other family members had tested positive, sources said. The state maintained Maharashtra’s death toll remained at five as on Friday, the same as on Thursday.
At Saifee Hospital, civic sources said 14 people were found to be high-risk contacts and quarantined at the hospital, while 26 found low-risk were advised home quarantine. The OT area and part of the ICU were sealed. While the father was undergoing CT scan, the cardiac surgeon son is believed to have gone near one of the OTs to meet people. Saifee has been told to cancel surgeries and not have OPDs for a few days, a civic official said.
At Breach Candy Hospital, where the cardiac surgeon had operated on a patient on Monday, the entire catheterisation lab was shut for disinfection. Around 15 people from the department, including doctors, technicians, ward boys and sweepers were put under home quarantine. While hospital authorities couldn’t be reached for comment, sources said the hospital was putting together a list of patients the doctor had visited in the ward.
AMC Suresh Kakani said the entire hospital hasn’t been sealed, but areas where the doctor visited or operated have been kept closed for disinfection. A decision on opening up these areas can only be taken after the second confirmatory test comes out. The doctor was tested in a private laboratory. “As per ICMR rules, the first ten positive results have to be validated by a government laboratory,” he said, adding all standard surveillance and isolation procedures are being followed.
Saifee hospital management maintained their services were unaffected. “The deceased doctor underwent a CT scan at Saifee and was diagnosed as ‘diagnostic for Covid-19’. The surgeon was transferred to the special isolation facility at Hinduja where he died,” said Dr Vernon Desa, director, medical governance and clinical compliance at Saifee. “All containment and surveillance measures have been implemented to ensure safety of our staff, patients, and visitors. The hospital is fully operational,” he said.
BMC officials said the burial was carried out by civic officials in the presence of a few family members.
Medical education minister Amit Deshmukh said the state has started flu OPDs across 18 medical colleges. Health minister Rajesh Tope said PPEs are being procured by the Centre as well the state. “Even as the number of cases are increasing, there is an increase in patients getting better. A total of 19 patients have been discharged so far,” Tope said.
-Inputs by Bhavika Jain