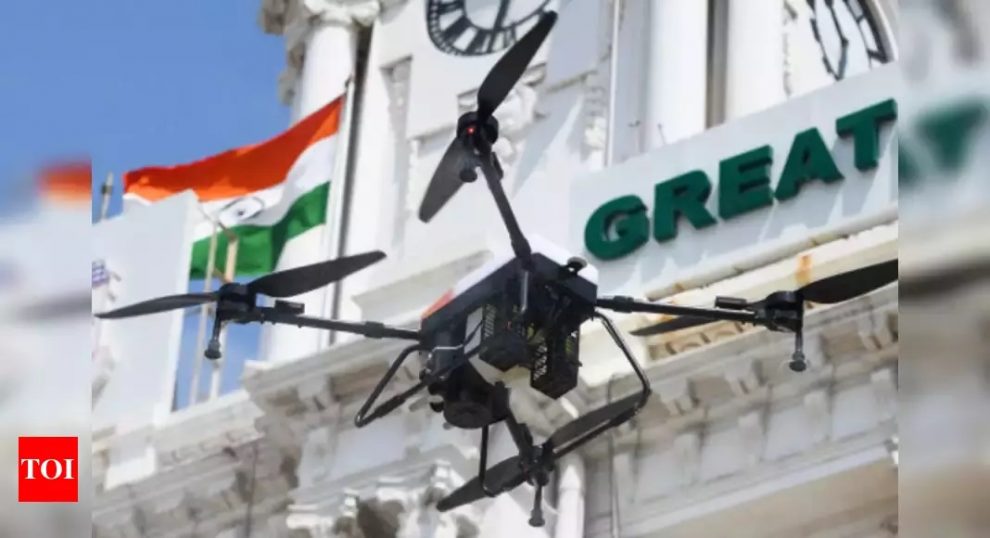 NEW DELHI: Drones were deployed to warn people against breaching restrictions and more booked for the violations on the second day of the three-week coronavirus shutdown on Thursday, as central and state authorities ramped up measures to ensure there was no supply disruption of essential commodities.
The unprecedented national shutdown also had a tragic fallout when a 28-year-old man allegedly killed his younger brother for stepping out of their home in Mumbai’s western suburb of Kandivali.
Police said Rajesh Laxmi Thakur killed his younger brother Durgesh after the latter stepped out of the house despite repeated warnings about the lockdown on Wednesday night, an official from Samta Nagar police station said. The official said Rajesh has been arrested.
Prime Minister Narendra Modi had made a fervent appeal to the countrymen on Tuesday night not to cross the ‘lakshman rekha’ of their homes in the next three weeks to make the lockdown a success in a bid to halt the spread of coronavirus.
More on Covid-19
Coronavirus pandemic: Complete Coverage
21-day lockdown: What will stay open and what won’t
How to quarantine yourself at home
Trust the newspaper for your daily verified news
According to data from the Centre and states, at least 15 people have died of COVID-19 and the number of infected cases rose to 649.
Roads wore a deserted look as police personnel kept a tight vigil but violations relating to prohibitory orders continued.
A ruling Congress MLA in Puducherry was booked for allegedly violating lockdown rules and distributing dole in the form of vegetables in bags to about 200 people outside his home, Lt Governor Kiran Bedi said.
In a WhatsApp message to mediapersons, she said an FIR had been registered against A John Kumar and also the people who had assembled outside his home in Nellithope village on Wednesday. The Orleanpet police also confirmed the filing of the cases.
Police vehicles fitted with public address systems went around the residential areas in several places to announce that restrictions under Section 144 of the Code of Criminal Procedure (CrPC) that prohibits assembly of more than five persons are in force and advised people to stay indoors.
In Srinagar, police were also using drones to announce the restrictions on the movement of people, an official said.
In Tamil Nadu, police booked over 1,200 people for violating the Section 144 CrPc order.
Police personnel also adopted novel ways to create public awareness as well as punish violators.
In Sivaganga, police made violators carry awareness banners for a while, even as they were made to stand apart from one another, in an obvious effort to implement social distancing to prevent any spread of the virus.
At Gudiyatham in Vellore district, police administered a pledge to those who were loitering in public defying prohibitory orders, to abide by the law.
Reports of people being booked for violating prohibitory orders as well as home quarantine conditions also came from other parts of the country.
In several cities and towns, people were allowed to buy essentials like groceries, vegetables and medicines keeping social distancing in mind with customers allowed only in batches to purchase items and medicines.
Amid reports that trucks and food delivery personnel were being stopped by police in several cities, authorities were taking steps to sensitise the police and asking them not to intimidate anyone while enforcing the lockdown.
In the national capital, the Delhi Police directed all its personnel to allow persons and vehicles engaged in essential services to remain operational in the national capital.
All traffic, picket and beat staff have been briefed to allow identified retailers, operators and online delivery services to operate.
This comes a day after the Delhi Police held a meeting with representatives of e-commerce websites and assured them help in ensuring smooth movement of essential services.
A Delhi Police constable was also suspended for allegedly damaging vegetable carts during the lockdown period, officials said.
The constable, who was identified as Rajbir, was posted at Anand Parbat Police Station, they said.
The order came a day after a video of the incident went viral on social media.
In the short clip, the constable can be seen overturning three vegetables carts one by one.
The Delhi government also decided to allow shops selling essential items to operate round the clock so that there is no rush of people, Lt Governor Anil Baijal told reporters.
Also, the SDMs and ACPs concerned have been directed to ensure shops selling groceries, vegetables and milk remain open and essential items are adequately stocked in their respective areas, Baijal said.
In Chandigarh, buses operated by the Chandigarh Transport Undertaking were deployed for delivery of essential items to people.
With people across the country confined to their homes, the National Book Trust (NBT) provided its select and best-selling titles for free download to encourage reading during the period.
“The PDFs are for reading only and any unauthorised or commercial use is not allowed,” an official said.

Unnao Case: Finally The FIR Has Been Lodged Against BJP MLA

Appeal people not to visit places of worship during lockdown: Islamic Centre to religious leaders