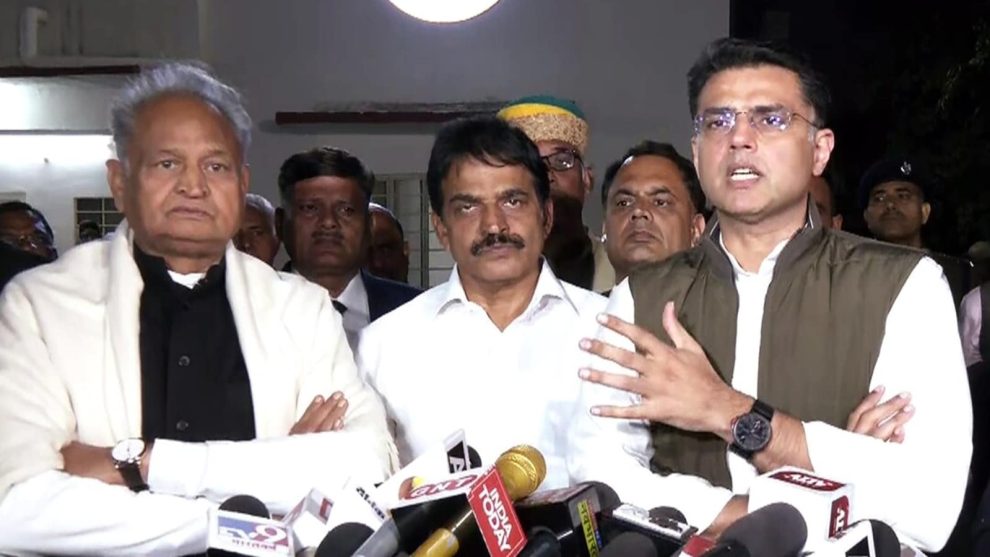 ‘Political break…’: BJP mocks Cong over Gehlot-Pilot’s Rajasthan show of unity
The BJP on Wednesday mocked the show of bonhomie between feuding Rajasthan Congress leaders Ashok Gehlot and Sachin Pilot as a ‘political break’ and predicted a swift return to the squabbling and infighting that has plagued the ruling party over the past two years.
Two Naxals killed in encounter along Madhya Pradesh-Chhattisgarh border
Two Naxals were on Wednesday morning gunned down during an encounter with the Hawk force and the Central Reserve Police Force (CRPF) on the Madhya Pradesh-Chhattisgarh border, security forces said.
Queen Elizabeth ‘laughed out loud’ when she saw herself with Donald Trump as…
Biographer Gyles Brandreth who had a close relationship with certain members of the royal family, in his book on late monarch Queen Elizabeth II has shared some insights into her personality. Queen Elizabeth II, known for her sense of humour, met former US president Donald Trump in 2018.
OnePlus to launch monitors in India on December 12. Check details
Chinese electronics manufacturer OnePlus, which primarily makes smartphones, has announced it is expanding its product portfolio in India, and will launch its first two monitors in the country on December 12.
Alphonse Puthren looks unrecognisable in viral photo ahead of Gold release, fans react ‘is he okay?’
Filmmaker Alphonse Puthren, who is gearing up for the release of his Malayalam film Gold, is back in the spotlight after seven years since the release of his last film, Premam. A new picture of Alphonse has surfaced online and left his fans wondering if he’s alright.
VVS Laxman reveals why Rishabh Pant continues to be backed: ‘Not too long ago, he scored a crucial.
India stand-in coach VVS Laxman spoke about Rishabh Pant and addressed the long rope that has been handed to the young wicketkeeper batter. Pant has been around for a long time now, and while he has already stamped his authority in Tests having scored centuries in Australia, England and South Africa, the 25-year-old has failed to replicate the same success in limited-overs format.
Katrina Kaif wanted to do stretches because she felt lazy, here are 6 exercises Yasmin Karachiwala suggested: Watch
Katrina Kaif loves working out, and her fit physique is proof of the same. The Phone Bhoot actor dedicates her healthy lifestyle to Pilates. Her trainer, Yasmin Karachiwala, often gives a glimpse of Katrina’s workout routine on social media to inspire the star’s fans. Here’s how you should wash your hair to maximize cleaning and reduce damage.
(Except for the headline, this story has not been edited by GOVT.in staff and is published from a syndicated feed.)