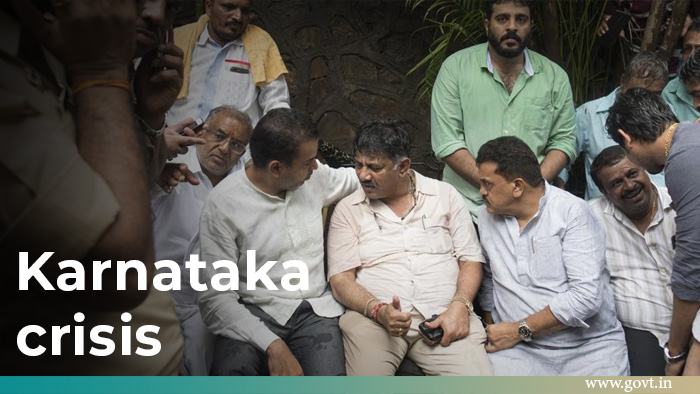 As the number of resignations by MLAs of the Congress and the JD(S) in Karnataka is continuously increasing, reducing the ruling coalition to a minority. Chief Minister HD Kumaraswamy is scheduled to chair a crucial cabinet meeting around 11 am Thursday to discuss the political situation and to take a decision on the future of the coalition government in the state.

The political crisis also reached New Delhi after 10 Congress and JD(S) MLAs, who quit last week, moved the Supreme Court alleging that Karnataka Speaker Ramesh Kumar is deliberately not accepting their resignations. A bench headed by Chief Justice of India Ranjan Gogoi said it would hear the petition Thursday.

Amid all the drama, a BJP delegation led by state party chief B S Yeddyurappa met Governor Vajubhai Vala Wednesday, requesting him to advise the Speaker to expedite the process of accepting the resignations of all MLAs.

The BJP has demanded Speaker Ramesh Kumar’s resignation while expressing anger over the delay in accepting resignations of rebel MLAs from the ruling coalition.

Speaking to journalists, BJP MLA and former minister M. P. Renukacharya claimed that the Speaker was responsible for the Wednesday’s ugly scenes in Vidhan Sabha as things would not have happened if there was an early decision on the resignations of MLAs.

The Supreme Court will hear rebel MLAs’ plea on Thursday

The Supreme Court, which heard the plea of 10 rebel MLAs, ordered them to meet the Speaker in person at 6 pm on Thursday. The apex court also asked the Speaker to grant them an audience, hear them, and take decision forthwith or in the day.

The court directed the Speaker to inform his decision on Friday. It also ordered Karnataka DGP to grant protection to the rebel MLAs.

Following the order, the rebel MLAs are expected to reach Bengaluru from Mumbai.

(with inputs from Indian Express)

Fact Check: Centre did cut down Aligarh Muslim University funds, but not to the extent being claimed