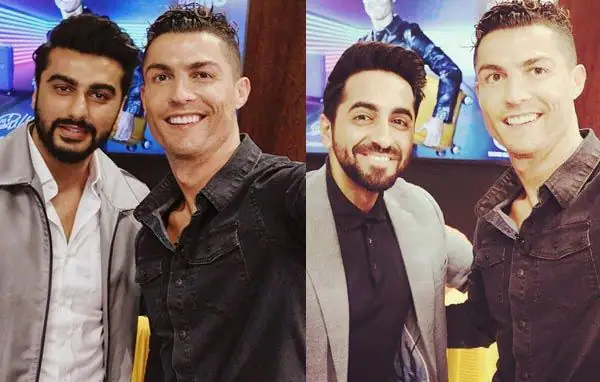 Following the #boycottbollywood trend flooding social media, actor Arjun Kapoor issued a statement about the film industry making a mistake by staying silent on this issue. The actor said it was high time the film fraternity came together and did something about it. Consequently, he became the target of online trolling.

Around this time, a screenshot of a tweet allegedly made by footballer Cristiano Ronaldo went viral Featuring Ronaldo’s selfie with Kapoor, the tweet reads: “This unknown guy forcefully rushed in to my dressing room and forced me to take a selfie with him the way we look like friends. What a looser.”

But did Ronaldo tweet this? AFWA’s investigation found that the screenshot was digitally altered. Ronaldo never tweeted this. His selfie with Arjun Kapoor dates back to 2018.

While the Twitter handle is the correct one, and the account appeared verified, there are subtle hints all over the tweet that point to its lack of authenticity. There are multiple mistakes in the tweet. The words “loser” and “into” have been misspelt as “looser” and “in to” — something that seems suspect.

The date mentioned in the screenshot was May 23, 2018. So, we tried to look for Ronaldo’s deleted tweets posted around this date on the archiving website, Wayback Machine. However, we couldn’t find any such tweet.

Upon reverse searching the viral photo, we found it on Arjun Kapoor’s Instagram page in a post from May 16, 2018. Kapoor wrote in the caption: “Amazing feeling meeting & talking football with Cristiano !!! Heck of a player, heck of a guy. All the best for Kiev & Russia.”

Kapoor had tagged the luggage brand American Tourister in the same Instagram post. Subsequent refined searches led us to a video the brand had shared on its YouTube channel on June 22, 2018. In it, Kapoor, among others, could be seen meeting Ronaldo. As per the description on the channel, nineteen influencers from around the world met Ronaldo in Madrid. Indian actor Ayushmann Khurrana was also a part of this event.

Khurrana also shared his selfie with Ronaldo on Twitter on May 16, 2018. The backdrop in both selfies features the same advertisement for American Tourister. This clearly points to the fact that the viral photo is from the same event.

Yes. We found multiple about the two. reported that when Kapoor met the Portuguese footballer, he told him about his fanbase in India. Responding to this, the latter had said that he would love to visit India, adding that he was aware of how much Indians loved him.

It is very unlikely Kapoor “forced” Ronaldo to take a selfie with him in a brand event such as this. Also, had Ronaldo tweeted any such thing about Kapoor, it would have definitely made the news. However, there are no reports indicating this.

To further make sure of this, AFWA got in touch with Ronaldo’s spokesperson, who said this tweet’s screenshot was “fake”. Thus, we concluded that the tweet being used to mock Kapoor right now never existed in the first place.