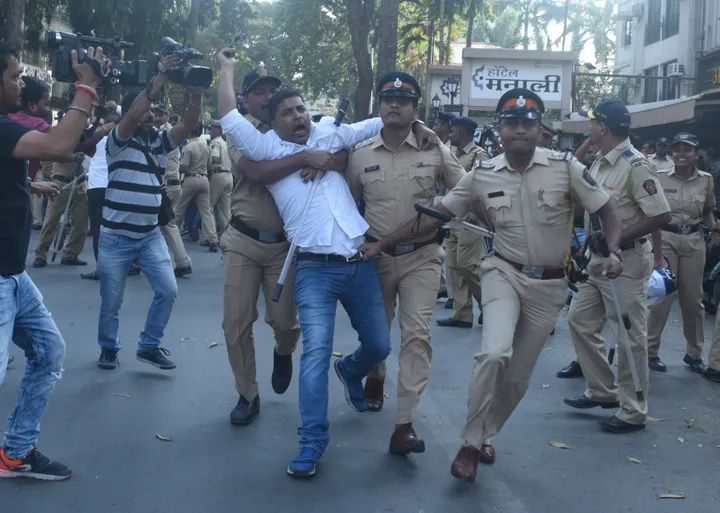 Following the death of Indra Kumar Meghwal, a nine-year-old Dalit student at Saraswati Vidya Mandir in Jalore, Rajasthan, who was allegedly assaulted by his upper-caste schoolteacher, a video has been widely shared on social media. It shows a large group marching, supposedly to welcome Bhim Army chief Chandrashekhar Azad into the city.

In the comments section of one such post, we found a user pointing out that the video is related to Shihab Chottur, a Haj pilgrim from Kerala. In the video, we also noticed a young man wearing a skull cap walking between the crowd, closely followed by a group in pink t-shirts. Police appeared to be guarding the man. The people shooting the video also pointed their fingers at the same man.Shihab Chottur, a 30-year-old man from Kerala, is on an 8,640 km journey on foot to Mecca. He started his journey on July 2 and is expected to complete the trip in 280 days, walking through six countries.We found the verified YouTube channel of Chottur and it contained a video of him walking with a crowd, wearing a similar t-shirt as seen in the viral video. The video was uploaded on August 17 — and these visuals are from the time when his walkathon reached Rajasthan.

Similar videos of Chottur were uploaded to Facebook and YouTube and claimed to be from Nagaur, Rajasthan.On his verified Facebook account, Chottur also uploaded a photo of him and three other men in the pink t-shirt. These three men in the same t-shirt are seen walking along with Chottur in multiple videos, including the viral one.

Jalore has witnessed protests and demonstrations following the death of a young student. Dalit groups on August 18 staged a demonstration outside the Collectorate in Jalore, demanding justice for the victim’s family.

Bhim Army chief Chandrashekhar Azad, on his way to Jalore to meet the relatives of the victim, was stopped by police twice

It is hence clear that while the video in question is from Rajasthan, it shows Kerala man Shihab Chottur, who plans to make a Haj pilgrimage on foot. It has nothing to do with either the death of Indra Kumar Meghwal or with the Bhim Army. at Jodhpur airport.

Fact Check: This cloudburst is NOT from Pakistan! 2020 video from Australia viral with false claim
Why Nitish Kumar’s decision to ally with RJD may energise the Opposition