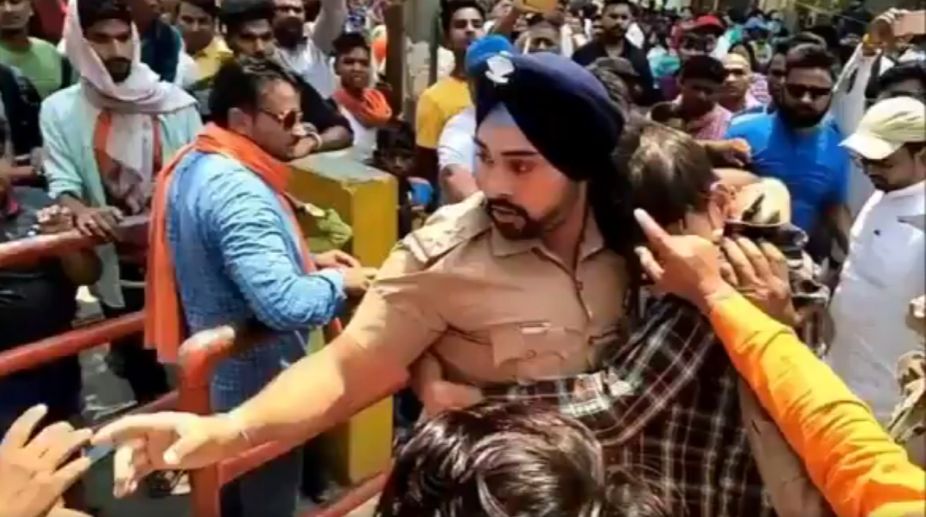 A video of a man threatening two women with a dagger has gone viral on social media. Those sharing the video claimed that the man in the video was Muslim and the women were Hindu. Text overlaid in the video suggested that the incident took place in Indore, Madhya Pradesh.

Since the video contained the word “Indore”, we searched online for news reports about such an incident. We found a July 26 Dainik Bhaskar report that carried the same video, confirming that this incident was recent.

Per the report, a man was arrested and charmed under the Arms Act for threatening and attacking his former girlfriend with a dagger. The incident took place in the MIG area of Indore.

In the video, we could see a signboard of an eatery called VM O2 Cafe. AFWA called the phone number mentioned on the board and spoke to Yogita Malviya, the proprietor of the cafe. Malviya confirmed that this incident took place in front of her cafe on July 25.

All three were eating inside the restaurant,” Malviya told AFWA. “Later, I heard that the ex-girlfriend of the man refused to marry him. The man got furious and tried to attack and threaten them.”

Malviya said that following the incident, the man was picked up by police. She added, however, that neither the man nor the women in the video were Muslim.

As per the Bhaskar report, the man’s name is Piyush alias Shanu, the son of Bharat Singh Kachawa. To further confirm this, AFWA contacted Ajay Verma, the SHO of the MIG colony in Indore. Verma reiterated that this incident was not at all communal in nature and said that both the parties are Hindu.

“The man named Piyush had a relationship with this woman, but the woman refused to marry him. So, the man attacked her with a sharp weapon. We arrested the man on the same day,” said the SHO.

Nitish Kumar on party MLA’s objection to cabinet expansion: ‘Not possible…’
Why experts say India does not need a population policy