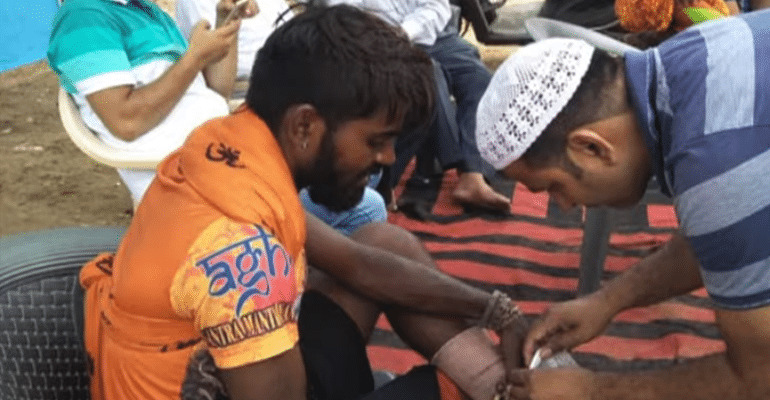 During this time of the year, the devotees of Shiva, known as “Kanwar yatri”, “Kanwariyas” or “Kanwars”, take an arduous long walk to collect the holy water from the river Ganges to worship the deity at their respective places.

According to news reports setting an example of communal harmony, Muslims in several places have come forward showering petals and extending assistance to these Hindu pilgrims.Meanwhile, several people have posted an image on social media claiming that it showed a Kanwar yatri refusing to take money from Muslims. The photo showed a man donning a skull cap offering something to a Kanwar Yatri, who reacted with folded hands.

The Hindi captions on Twitter and Facebook read, “It’s a matter of pride… Muslims were distributing 500-500 rupee notes during the Kanwar Yatra. This Hindu brother refused to take the Rs 500 note and said that you are slitting the throats of our Hindu brothers and stabbing them in the back. We will not take free money from you. I won’t even take gold from you, even if it is offered free.”

India Today Anti Fake News War Room (AFWA) has found that the viral image is six years old. The Muslim man in the picture was Dr Abid Saifi, a social worker from Shamli, Uttar Pradesh, who was offering medical assistance, food and water to Kanwariyas. In the viral picture, he was offering band-aid strips to the man, who, in return, greeted him.

With the help of a reverse image search, we found the picture in a photo album posted on a Facebook Page in 2018. Other images in the post showed the same man distributing fruits to Kanwariyas and attending to their wounds. This post can be seen below.

When another photo from the same page was reverse searched, Google led us to an India Today aritclepublished on August 3, 2016. The headline of the article read, “Communal Harmony: Muslims in Bareilly distribute food to Kanwar Yatra pilgrims.”This article had other images of the same man—who was wearing the same attire and skull cap while offering aid to the Hindu pilgrims.

The article identified him as a member of Saifi Samaj in UP’s Shamli. They had extended assistance to kanwars by setting up medical camps and distributing essentials.

Following this clue, AFWA contacted Dr abid saifi  the head of Saifi Samaj in Shamli, an organisation known for its Social Work in the area.Dr Saifi, who is also known as Saifi Hindustani, confirmed that he was the man in the viral picture, which was taken in Shamli during the 2016 Kanwar Yatra season.Dr

Saifi refuted the claim in the viral post. “It is utter rubbish and fake news. Like every year, we were offering assistance to the kanwars in 2016 when this photo was taken. Not a single Hindu brother refused to take our help,” he stated.

We asked if he was seen offering money to pilgrims in the photograph. “We never offer money as assistance. We offer medical help, food items, and water to the Kanwar yatris. I was distributing band-aids in the photograph. I was holding band-aid strips and the Hindu brother was showing his gratitude by greeting me,” explained Dr Saifi.To support his claim, Dr Saifi sent us another picture of his voluntary work from 2016 in which he was seen wearing the same dress while holding band-aid strips. Comparing this picture with the viral one helped to understand that it was indeed band-aids that he was offering in the viral image and not money.