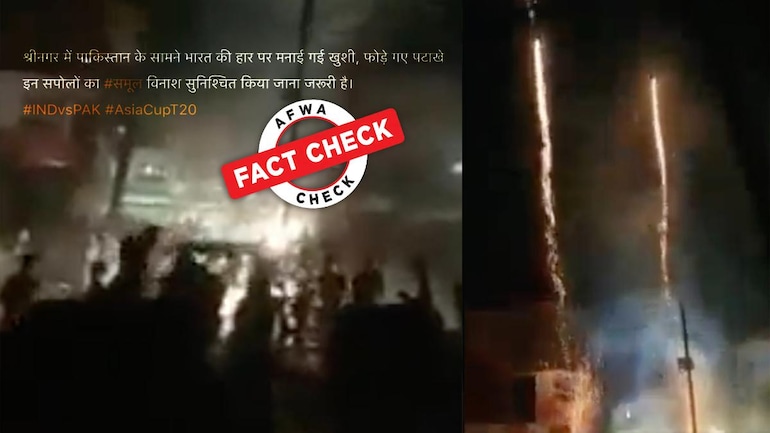 Social media users shared a video falsely claiming that people in Srinagar celebrated Pakistan’s victory against India in the 2022 Asia Cup on September 4.

Pakistan won against India by five wickets in their Super 4 game of the 2022 Asia Cup in Dubai on September 4. Soon after the match between the traditional cricket rivals, a video was shared by many online supposedly showing how people in Srinagar celebrated Pakistan’s victory against India with firecrackers.

Sudarshan News shared the video on Twitter, along with a provocative message against those supposedly celebrating Pakistan’s victory. Sagar Kumar, a journalist from Sudarshan News also tweeted the video with the same claim from his verified account. Both later deleted the tweets, but the video bearing the Sudarshan News watermark has been widely shared since.

AFWA found that the video is at least two years old and not related to the Pakistani cricket squad’s latest victory against the Indian team.

AFWA found that the video is at least two years old and not related to the Pakistani cricket squad’s latest victory against the Indian team.

The police also added the video in question was around six years old and it was from Srinagar’s Nawakadal chowk area.

t is noteworthy, however, that similar incidents have been reported from Jammu and Kashmir in the past. Jammu and Kashmir Police in October 2021 registered a case about the alleged celebration of the Pakistani cricket team’s victory over India in the T20 World Cup.

AFWA couldn’t independently verify the context or the date of the video in question. However, it is clear that the video is at least more than two years old and not related to Pakistan’s recent victory in the Asia Cup 2022.

Menopause Symptom-Management Clothing Made Possible By NASA Technology
Artemis I SLS-Orion Spacecraft Launch May Not Be Possible This Month, NASA Says