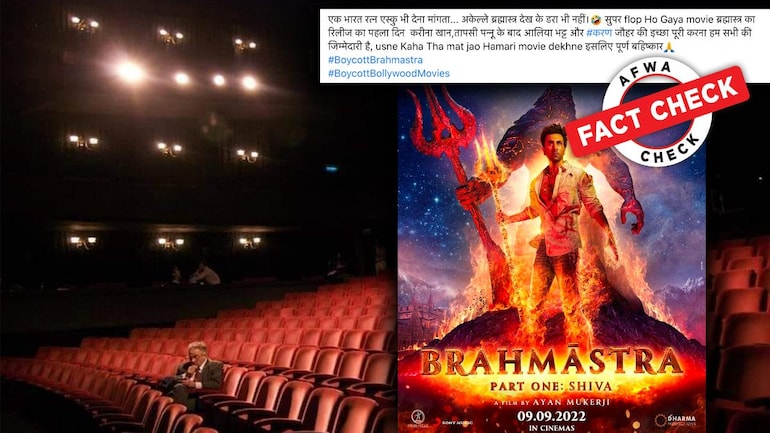 Brahmastra, the purported magnum opus of director Ayan Mukerji, started with a bang at the box office. While it has received a lukewarm response from critics, a section of social media is keen to follow the boycott trend against this movie. Amid this, an image of an empty theatre has gone viral on social media.

People who shared this image claimed this to be from the screening of Brahmastra on the first day of its release. A man can be seen in this image sitting in the middle between the empty chairs, while two others were having a chat in the corner.

This picture was shared with a caption calling for a boycott of this movie. Users also cite this image to claim that Brahmastra flopped on its first day as the theatre remained empty.

AFWA Probe
With the help of a reverse image search on Google, we found the same image in a report by “The Print” published on 10 January 2021, making it clear that the image is not recent, and not related to Brahmastra by any means.

Although the caption did not carry any details about this photograph, it mentioned this as a representational image of an empty theatre.

But where was it shot, and when?

We searched further for this image and found this on Flickr, a website dedicated to sharing photographs online.

There, it mentioned that the photograph was taken by a photographer named Beatrice Murch on August 25, 2009. Although it did not reveal the place where it was shot, it carried some tags like Argentina, Buenos Aires and Teatro Alvear.

With the help of these keywords, we were able to locate a theatre for performing arts named ‘Teatro Presidente Alvear’ in Buenos Aires, the capital of Argentina.

Some more searches with keywords took us to a Spanish article on this theatre where we found several images that show the inside of the auditorium. When we compared the seat arrangements and the design of the lighting on the wall of the theatre, it became clear that the viral image was indeed taken here.

On the other hand, Brahmastra has settled the nerves of Bollywood after the collections of this movie crossed 160 CR worldwide in the first two days of its release.

Therefore, it is safe to conclude that a decade-old image of an empty theatre from Argentina was shared with a false claim targeting Brahmastra.