Fact Check: Scary video of burning plane at airport is from Moscow, Russia - NOT India - Govt.in - Telling the truth- always! 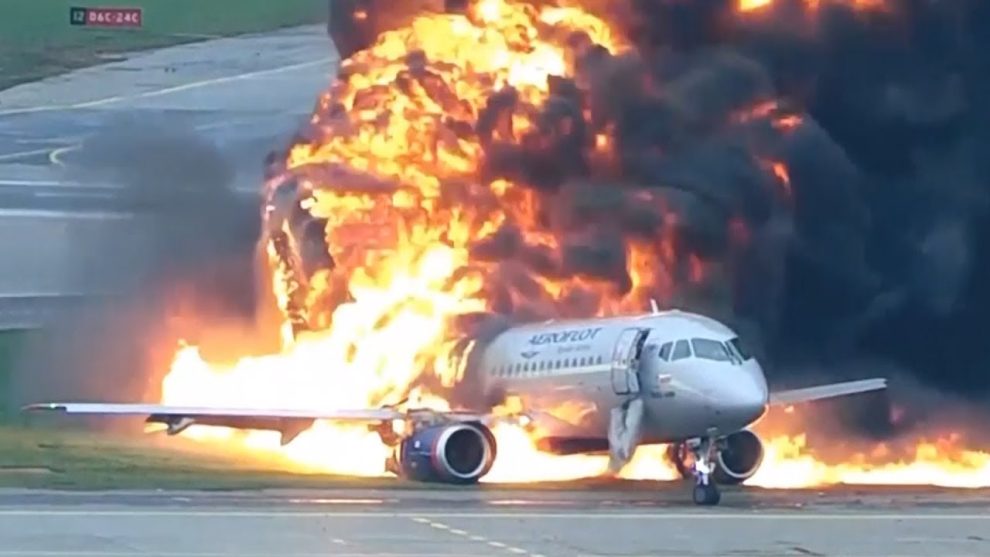 Billowing black smoke, roaring orange flames, people escaping from a burning aeroplane via an evacuation slide. These are scenes from a video that has been making the rounds of social media.

The video that stands at a little over nine minutes in length shows people inside a plane panicking as a wing catches fire. It also shows the burning plane pulling into the frame and subsequently people escaping from it. Finally, it shows firefighters attempting to douse the flames.

This frightening video, per many sharing it, was from an Indian airport. They also claimed it was recent. But was it?

Subsequent refined searches led us to a similar video shared by The Telegraph on April 16, 2020. The footage was reportedly from a 2019 aircraft fire in Moscow.We noticed the name of the Russian airline “Aeroflot” written on the body of the plane on fire.

The plane caught fire after it made an emergency landing moments after take-off at Moscow’s Sheremetyevo airport. The aircraft, a Sukhoi Superjet-100, was bound for Murmansk. Reportedly, its crew sent a distress call following malfunctions amid bad weather shortly after take-off.

After making an emergency landing at the airport, the plane’s engines caught fire on the runway, Aeroflot told the media, adding that its crew “did everything to save the passengers”. Despite this, around 41 people were killed in the incident. Pilot Denis Evdokimov was reportedly formally charged with negligence over the crash landing.

We also found multiple media reports ( https://www.bbc.com/news/world-europe-48171392 ) from May 2019 about the ill-fated crash. This proved that this video was Russian, and not Indian.But was there a recent Indian aeroplane fire?A MiG-21 Bison aircraft of the Indian Air Force crashed in Barmer, Rajasthan, on July 28.

And on August 21, an IndiGo Delhi-Kolkata flight reportedly asked the Kolkata Air traffic control (ATC) for priority landing after a false cargo smoke warning. All passengers on the flight were reportedly safe. However, we could not find any other recent reports that indicated a major passenger plane fire in India.