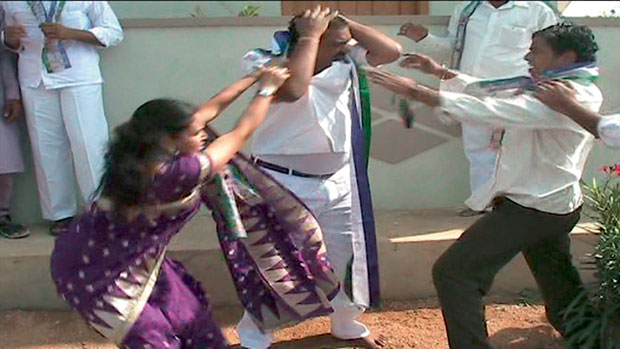 A peaceful flag-hoisting ceremony suddenly turned into a scuffle. This is a video that on social media. Per those sharing the video, this incident took place at the Karimnagar Congress office in Telangana.

The in the presence of a bunch of people. It then cuts to a woman dressed in a purple sari, supposedly the chief guest at the event, engaged in a fight with a man in white. Another man then hits the man with slippers. The brawl continues for a while as the woman shouts at the man.

Upon reverse-searching frames from the video, we found a entitled “In Fight After Flag Hoisting, Politicians Use Slippers and Slaps”. Per the report, two YSR Congress leaders engaged in a brawl after a ceremony to hoist the Independence Day flag at the party office in Telangana’s Karimnagar district.

The same incident was also reported by the on August 16, 2014. Per the news report, Ganta Susheela, a woman YSR Congress leader, and her husband Sathish thrashed the party’s district president Singireddy Bhaskar Reddy for allegedly not intimating her about Independence Day celebrations at the party office.

She also alleged that Reddy was misbehaving with women workers of the party and using filthy language while talking to them. The report said that the Karimnagar rural police registered a case against Reddy under the SC/ST Atrocities Act for abusing Ganta Susheela in the name of her caste.

Thus, it is clear that this eight-year-old video of a scuffle shows YSR Congress Party members engaged in a scuffle — not Indian National Congress members.

No, R Madhavan DID NOT lose his house while trying to fund ‘Rocketry: The Nambi Effect’
Non-locals in J&K get voting rights, Opposition says ‘imported voters’ will help BJP